Ocean and air freight rates and trends; customs and trade industry news plus Covid-19 impacts for the week of October 18, 2022.

Hi, I’m Jesse from the Flexport Editorial team with some great news about the Freight Market Update…it’s going to get even better!

FMU was created with one goal in mind—keeping you updated on the state of the global supply chain which included crossing times, port congestion status updates, factory closures, lockdowns, and much more. Now that the global supply chain is settling into its next normal, we are rethinking our FMU content to make it broader, better and even more helpful than before, to keep you up-to-date on the latest in logistics and global trade.

We’re still in the early stages of this refresh and would love to get your feedback and ideas to shape the future of the FMU. With this goal in mind, we’ll be testing new content every week, featured prominently at the top, and asking for your comments.

We want to make FMU the best it can be, for you, so thank you for reading, subscribing and sharing your valuable feedback. 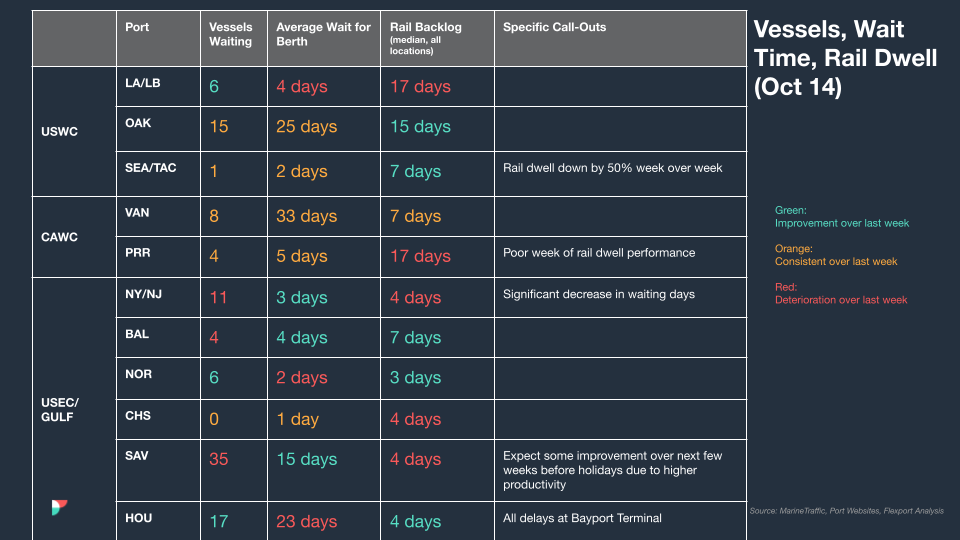 On October 12, the Office of the United States Trade Representative (USTR) announced the next steps in the statutory four-year review of the Section 301 tariff actions currently in effect for certain imports from China. USTR is seeking public comments on the effectiveness of the Section 301 tariffs, and will publish detailed questions to facilitate the public’s preparation of comments by November 1. The public docket will open on November 15, 2022, and close January 17, 2023.

According to Bloomberg, chip delivery times shrank by four days in September, representing the biggest drop in years—a hopeful sign that the industry’s supply chain woes are easing. This coincides with a sales slowdown in markets, including personal computers, which has prompted chipmakers to start worrying about inventory getting too high.

According to FreightWaves, Port Houston saw its second busiest month ever in September for as imports surge. The volume increase represents at 26% year-over-year increase as compared to September 2021.

Is the recovery in logistics networks proceeding evenly around the world? There are signs that the disruptions to supply chains over the past two years are improving yet data from Flexport’s Ocean Timeliness Indicator shows uneven progress in Asia-Europe vs. Asia-North America routes.

The latest installment of perhaps the world’s premier economic forecast told a tale of slowing growth in GDP and trade volumes plus rising prices. And both its risk analysis and its forecasting track record suggest things may be even worse than the grim forecast suggests.

In the latest update we expect imports to increase sequentially on a real (i.e. inflation adjusted), balance of payments, seasonally adjusted basis by 1.2% in September after dipping in August. Exports are expected to rise by 0.5% on the same basis.