Ocean and air freight rates and trends; trucking and customs news for the week of October 16, 2019. 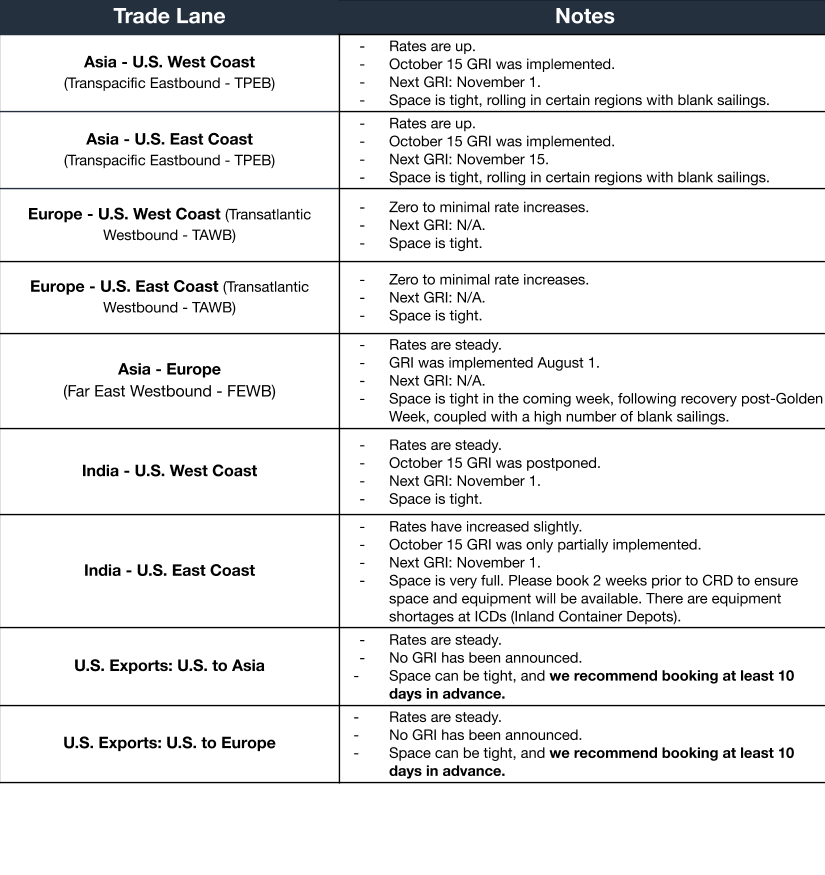 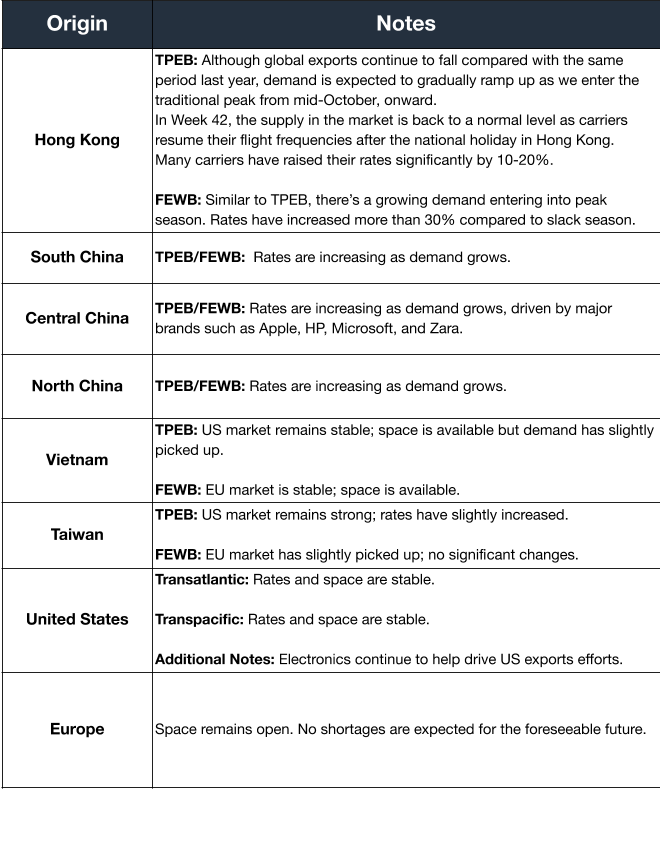 Where’s the Peak? This year’s ocean freight peak season has been missing in action, replaced by a ‘black swan’ event, when circumstances defy expectations and carry notable impact. The season, as Lloyd’s Loading List reports, has instead been characterized by supply and demand imbalances and spot rates trending low in the Transpacific Eastbound (TPEB) market. Two reasons: Front-loading of inventory earlier in the season to get ahead of tariffs and shifting production sources to Southeast Asia. Both practices that are cropping up not just in ocean, but air, as well.

Demand for Global Airfreight Drags While Capacity Rises The International Air Transport Association’s (IATA) reports that demand for airfreight (measured in freight tonne kilometers or FTKs) has been on a steady decline for 10 months, showing a 3.9% drop in August compared with the same period in 2018. At the same time, freight capacity (measured in available freight tonne kilometers or AFTKs) rose by 2% for the same time period. Not surprisingly, the US-China trade war is one source of blame.

Section 301 Updates On Sunday, October 13, President Trump tweeted that "phase 1" of a trade deal had been agreed upon and tariffs on Section 301 lists 1, 2 and 3, which were scheduled to increase from 25% to 30% on October 15, will now be postponed indefinitely. For now, very few details have been released on "phase 1" and more information is expected over the next few weeks. It appears that before anything is signed, China wants assurances that list 4b (scheduled to be implemented on December 15) will not be implemented. With no mention of tariff rollbacks, all tariffs currently in place are expected to remain. The next meetings are scheduled for mid-November at the Asia-Pacific Economic Cooperation (APEC) where there is hope a phase 1 agreement will be signed.

Steel and Aluminum Tariff Increase for Turkey President Trump tweeted Monday that the steel and aluminum tariffs that are already in place will be raised from 25% to 50%. The tariffs were originally reduced in May from 50% to 25% when the US stripped Turkey of its GSP designation. In addition, secondary sanctions will target any current and former Turkish government officials involved in “human rights abuses, obstructing a ceasefire, preventing displaced persons from returning home, forcibly repatriating refugees, or threatening the peace, security, or stability in Syria.”

USTR Releases more Details on US-JP Trade Agreement The USTR released more details on the US-Japan trade deal with a series of links on the framework of the agreement. Under the deal, which centers around agricultural products and digital/technology transfer, tariffs will slowly decrease over a 2-10 year period until the tariff is completely eliminated for that commodity. Both parties have signed the agreement, which is expected to go into effect fairly soon.

Counterfeit Nikes Seized A large shipment containing 14,806 pairs of counterfeit Nike shoes, representing various versions of Air Jordans, was seized by CBP at the Port of Los Angeles. Shipped in containers originating in China, the importer attempted to bring them in as "napkins." Had the shoes been the real deal, CBP reports the goods would have had an estimated retail value of close to $2.2M, based on the manufacturer’s suggested retail price.