Information about ocean and air freight rates for November 2017, with updates on capacity, delays, congestion, and trucking issues. 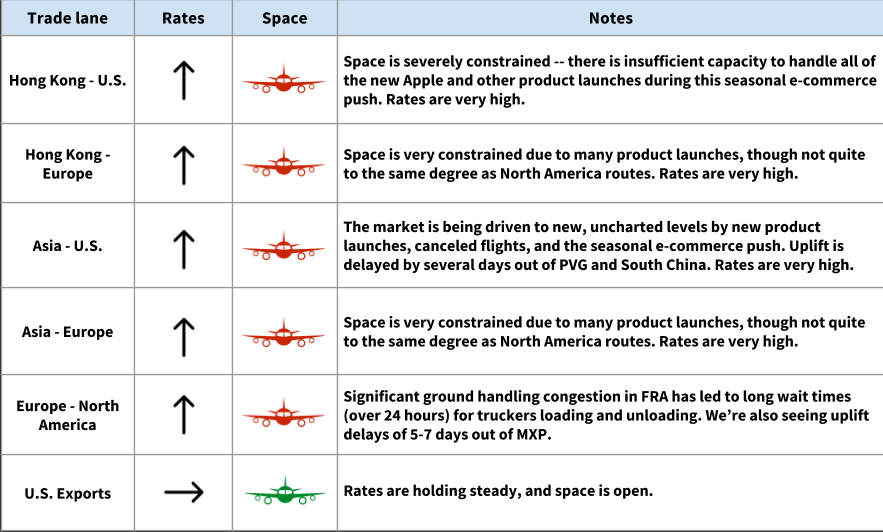 Space constraints are worse than ever, and rates are still climbing

Capacity issues are extremely severe. This is due to a combination of product launches -- by Apple and others -- as well as a seasonal e-commerce push and canceled flights. In short, there just isn’t enough space to fit all of the cargo being shipped.

"There is nowhere to turn," one air freight forwarder told the Loadstar, in an article about this season's "perfect storm" of high rates and space constraints. “It’s a carrier’s market. Airlines are definitely becoming more selective with what they take and accept.”

In a year that has been marked by a very strong air market with consistently high rates, the current rates are exceptionally high -- and still climbing as the winter holidays approach. "Rates are going sky high – and going up every weekend," the Loadstar source commented. Read more about the state of the air market here.

Uplift delays out of Asia and Europe

China gateways are also experiencing delays of 4-6 days before uplift, with the worst backlogs in South China and Hong Kong.

Heathrow is severely congested, with long lines of trucks (and reports of trucks being turned away). If you have cargo moving in or out of Heathrow, expect lengthy delays and trucking wait fees.

Book your air shipments in advance -- at least 10 days before the cargo ready date, if possible.

For urgent shipments, you should also consider booking direct flights. It's more expensive, but direct flights will avoid potential delays at transshipment airports. 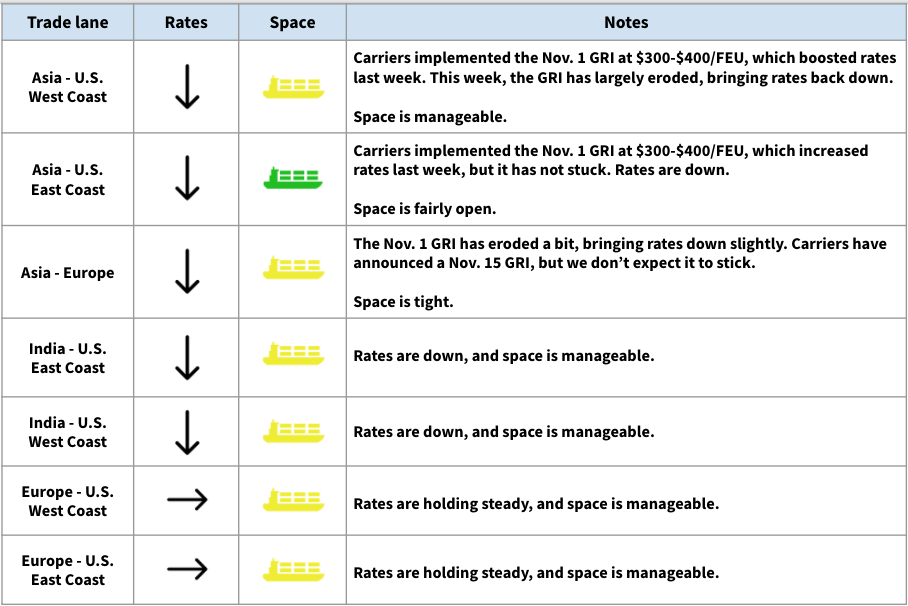 The Nov. 1 GRI is not holding

After a brief increase due to the Nov. 1 GRI, rates are sliding back down toward previous levels.

Carriers are not yet announcing blank sailings

Unlike in years past, carriers have not yet announced blank sailings for the winter season. (They typically use blank sailings during slack season to reduce overcapacity and keep prices up.)

The Pacific Northwest is experiencing port delays and capacity issues due to peak season -- especially SEA/TAC.

As of November 1, California has increased its diesel tax to 36 cents per gallon (this is a 20-cent increase). We’re seeing higher fuel surcharges from trucking providers as a result.

FTL rates in California are up

The eastbound FTL market in California is very tight. Rates are up 20% or more.