Ocean and air freight rates and trends; customs and trade industry news for the week of November 27, 2019. 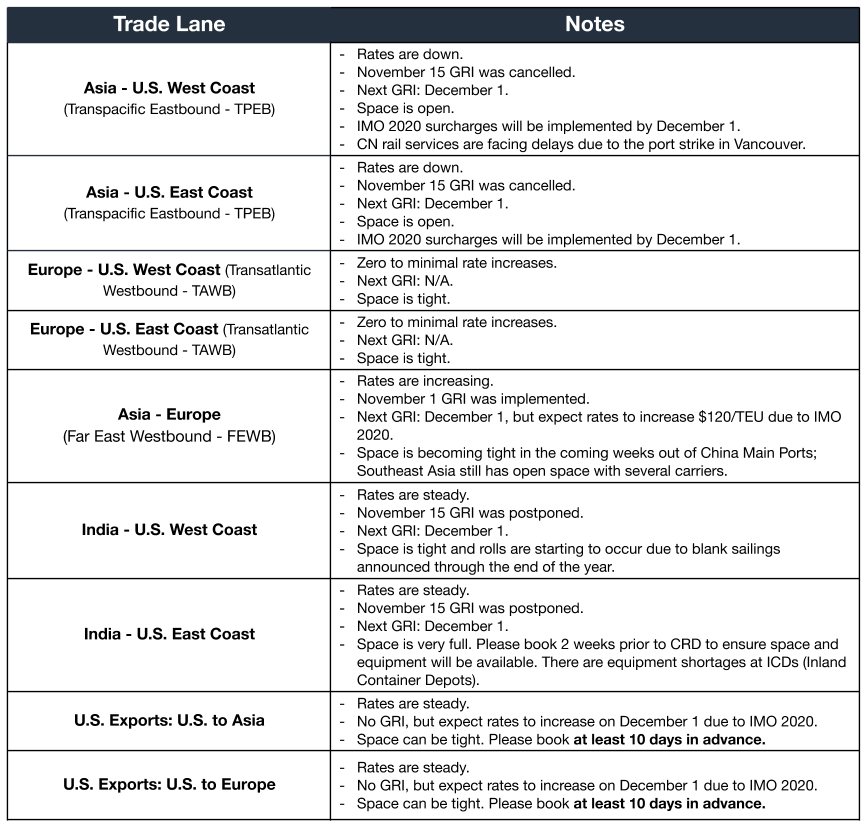 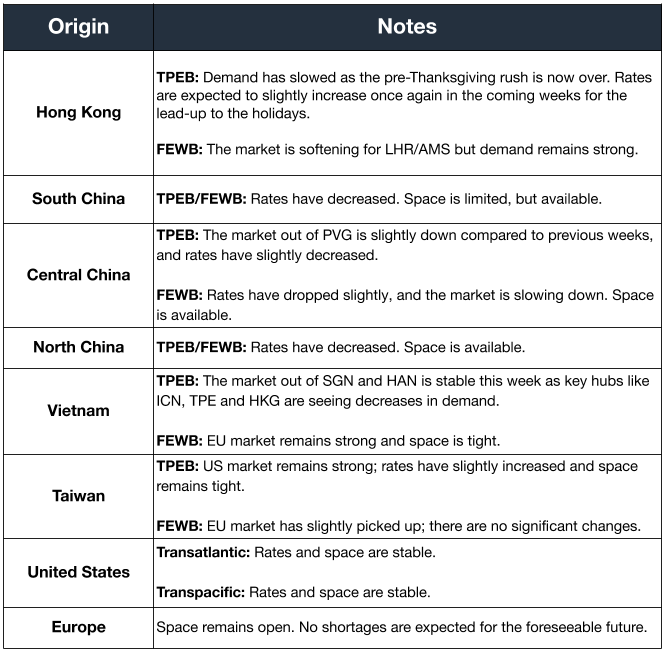 Catastrophic Fires at Sea on the Rise Major fires on large cargo ships are becoming more frequent with nine occurrences reported so far in 2019, according to The Wall Street Journal. Experts cite dangerous goods loaded without appropriate documentation, containers that fail to meet maritime safety standards, and a surge in inexperienced shippers, thanks to e-commerce marketplaces that broaden the supply chain.

Freight Rail Sets Sights on Late 2020 Freight rail industry leaders tell Freight Waves that volume growth may not occur until the second half of 2020. Plans to improve outlooks include homogenizing railcar types for more frequent use and increasing transparency via technology for better customer service.

US-EU Proposal on Product Testing The US and EU are proposing to recognize each other’s product testing on a wide array of goods they said, in separate releases here and here. The potential agreement includes electronics, toys, machinery, and measurement instruments. The new rules should help exporters comply with laws, allowing testing in the country they are located in, instead of a more lengthy process of sending products back and forth between the countries for testing compliance. The final agreement is expected to be put in place next year.

WTO Reports on Increased Trade Restrictions The WTO is growing concerned with the trade restrictions countries have placed on the industry and is pushing for a reversal of the trend, it said in a release. Trade growth is down to 1.2% from the estimated 2.6% that was expected earlier this year. This is the lowest growth in the industry for more than a decade when the financial crisis hit the US. The G20 countries have put in 28 new trade-restrictive measures that covered $460 billion in goods; it is the second-highest amount of restrictions ever set, only outpaced by last year. For context, only $93 billion in import-facilitation measures have been put in place during the same time period.

Proposed HTS Change for Pump Dispensers CBP is considering changing the HTS code for items similar to soap pump dispensers to be filed under 8424.89.90 instead of 8424.20.10. That’s because 8424.20.10 items have a powerful spray function that has triggers and valves to control flow through the nozzle. Items that fall under the 8424.89.90 subheading, however, simply disperse and project liquids, without acting as a "spray gun." CBP is allowing comments until December 20.