Ocean, trucking, and air freight rates and trends for the week of November 14, 2018 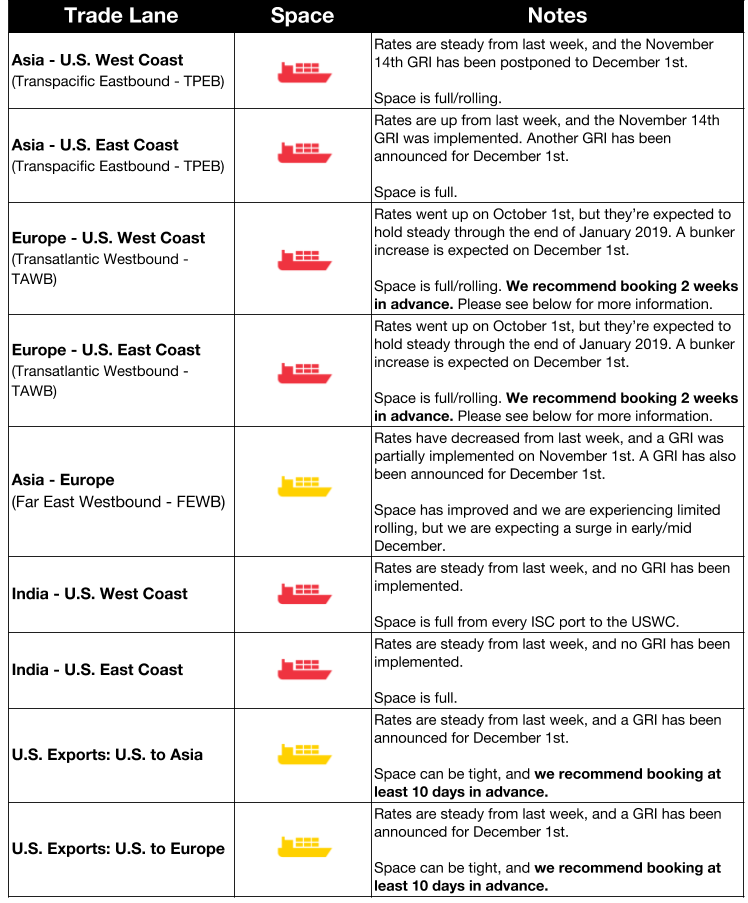 Peak season’s high transport volumes are helping the carrier recover from the industry slump in recent years caused by an oversupply of vessels. Hapag-Lloyd expects volume to remain high and freight rates to continue to recover through the rest of 2018.

The West Coast Marine Terminal Operators Agreement (WCMTOA) has confirmed the implementation of the PierPass 2.0 extended gates program in Los Angeles-Long Beach on November 19th. The Traffic Mitigation Fee (TMF) rate will be $31.52 per 20-foot container, and $63.04 for all other container sizes.

Amazon has confirmed New York City and Arlington, Virginia as Amazon’s HQ2. An immediate impact isn’t expected for either city, but industry experts will be keeping an eye on the transportation and housing markets.

Carriers are still debating on which method will be preferred. 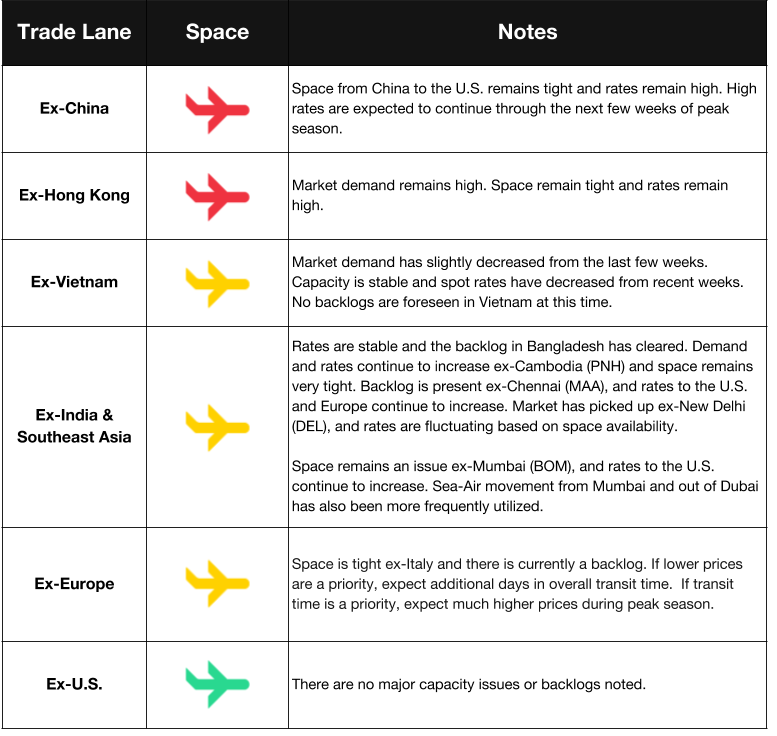 Private companies and individuals will soon be able to bring in sniffer dogs to screen air cargo in the U.S. In total, 12 organizations have been given approval to certify third-party canine teams who will screen air cargo for aircraft operators, foreign air carriers, and other parties operating with TSA approval.

The Wall Street Journal reports that more than 20 carriers around the world have gone out of business this year, most of whom were smaller European airlines. Rising costs are being blamed, although experts are expecting to see a few more smaller carriers fall off despite recent lower fuel prices as the industry moves into off-season.

The air market continues to experience slow growth as we continue through 2018. The industry is boosted by ecommerce, but slow supplier transit times are eliminating the need for an high-cost, high-speed mode option like air.

Startup WaveSense is commercializing ground-penetrating radar that can be used to determine environmental conditions below the road surface to help create reliable maps. This is a step toward an autonomous trucking industry, but other problems still need to be solved, like how driverless trucks would exit a highway for the final consumer destination, and how trucks would receive updated maps.

Some manufacturers are building factories closer to their consumers to reduce trucking costs and transit times. This move could be risky, as more factories means more supply that may not meet demand, but lower costs and the ability to avoid Chinese tariffs may make it a good investment.

Haulage is more vulnerable to theft than other modes of transport, and in-transit hijackings are the number-one threat to trucking around the world. Thefts in the U.S. and Canada tend to happen at unsecure cargo trucks at unsecure locations, but hijacking remains rare. In South America, Africa, and the Middle East, on the other hand, hijackings account for over 50% of truck theft.

EPA Cracking Down on Emissions Violations

California passed a state law in 2008 designed to phase in over time that requires diesel trucks and buses that operate in California to be upgraded to reduce their emissions. Two interstate trucking companies were fined hundreds of thousands of dollars last week for not installing filters that would prevent pollutants from contaminating the air.

The Trump administration is also pushing for pollution limits on commercial trucks.