Ocean and air freight rates and trends; customs and trade industry news for the week of November 13, 2019. 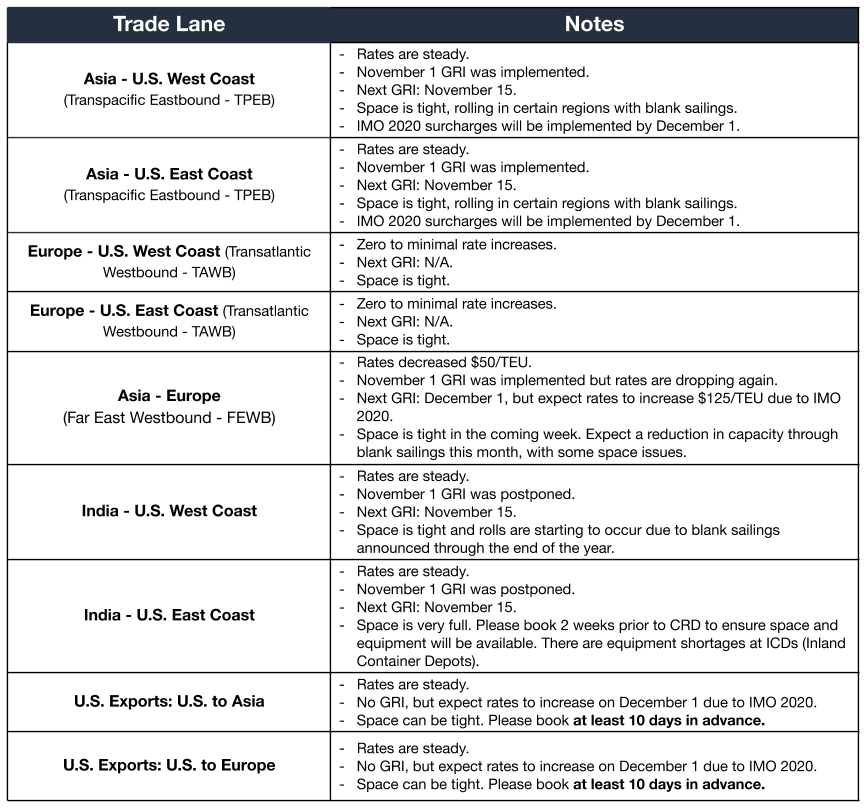 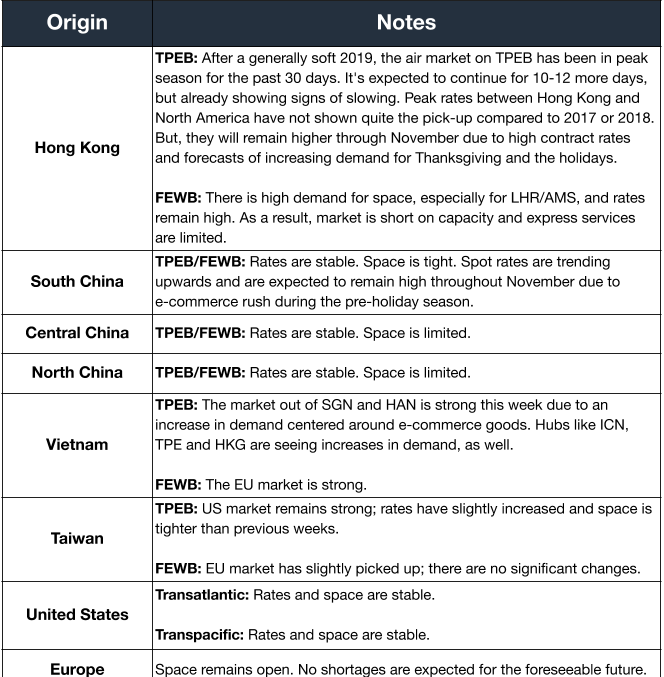 U.S. Inbound Container Decline Follows A Year of Inventory Loading Supply chain volatility continues as two of the United States’ bellwether ports experienced a drop in loaded inbound containers. WSJ reports that Los Angeles and Long Beach ports received 120,077 fewer containers in October — or 14.1% under last year. The plummet is due to inventory loading before multiple tariff increases on Chinese goods this year, but swings low against reports of a 5.2% decline nationwide.

Adidas Moves Speedfactory to Asia In an abrupt pivot on supply chain strategy, athletic footwear and apparel giant Adidas is moving its Speedfactory to Asia and closing Speedfactory locations in Germany and Atlanta. The robotic factories feature 3-D printing and other tech in a three-way approach to increase speed-to-market for footwear that included shorter product development and manufacturing lead times, as well as reduced transport times. Supply Chain Dive reveals that the company plans to extend Speedfactory tech beyond footwear once relocated.

Asia-Pacific Super-Bloc Prepares World’s Largest Trade Agreement Fifteen countries will review the final text of the world’s largest trade agreement with hopes of signing in 2020. The Regional Comprehensive Economic Partnership or RCEP creates a singular agreement between the 10 member nations of the Association of Southeast Asian Nations (ASEAN) and countries with which it had stand-alone agreements. According to CNBC, RCEP “will progressively reduce tariffs” and eliminate paperwork requirements for discrete export destinations. Urgency to finalize the pact has increased as the US-China trade war rages on.

China Deal or No Deal? Markets spent much of the past week trying to figure out whether a “Phase One” trade deal between the United States and China was forthcoming and whether it would remove tariffs.

Chinese exports were down 0.9% year over year in October, less than the September drop. October exports to the U.S. were down 16% from October 2018.

German exports rose 1.5% from August to September, beating expectations. The European Commission, meanwhile, downgraded its eurozone growth forecasts for 2019 and 2020.

Section 301 Exclusions Granted The USTR released product exclusions for Section 301 List 3. There are 34 specifically described products; 2 HTS numbers are completely exempt. Like the previously released exclusions, importers can retroactively re-claim duties to the list 3 implementation date of September 24, 2018. Unlike most of the exclusion lists, this will not be in effect for a full year from the publication date; it will only be valid through August 7, 2020.

Amendments to TFTEA Likely Coming CBP recently seized $2M in counterfeit purses and backpacks at Dulles International Airport. The knockoffs donned brand names such as Gucci, LV, Chanel, Dior, Prada, and Hermes. The ongoing issue has prompted the Senate Finance Committee to publish a 245-page report labeled "The Fight Against Fakes," which calls for amendments to the Trade Facilitation and Trade Enforcement Act (TFTEA) so more information can be shared with e-commerce platforms. A 2018 study found that 40% of purchased products from third-party sellers were counterfeit.

Deadline Reminders The Miscellaneous Tariff Bill Petition System (MTBPS), part of the US International Trade Commission, will be closing its portal for accepting petition submissions on December 10, 2019. The USTR Exclusion Portal for accepting Section 301 List 4 exclusion requests will close on January 31, 2020.