Recent news and updates related to the ocean and air freight market for the month of May 2017. 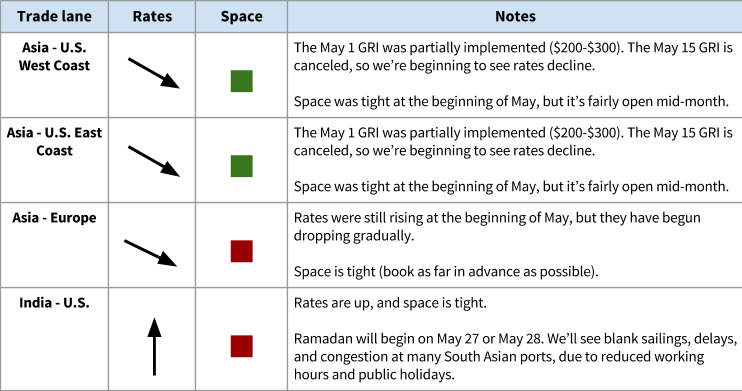 As indicated above, space remains tight from Asia-Europe and India-U.S. We strongly recommend booking your shipment at least 2 weeks ahead of time.

Traditionally, this is a time of year when carrier contracts are extended and modified. This may result in some changes and delays.

Congestion at the Port of Shanghai

At the beginning of the month, we were seeing major delays in and out of Shanghai due to port congestion. This has been steadily improving; most delays are now relatively minor.

Note: Even if your cargo isn’t departing from Shanghai, you may experience delays related to this congestion if your sailing is on the same string. For example, if your port of loading is Busan, and the ship calls Shanghai before docking at Busan, your departure out of Busan may be pushed back due to Shanghai congestion.

If you’re interested in fixed rates, talk to your Flexport team! These will be completed and finalized in the very near term.

The short version: Prices are high, and capacity is tight

Major airlines and airports in Asia are reporting significant increases in cargo traffic, which is keeping rates high. We expect rates to stay up in May. Space has been tight, and is likely to stay that way.

We anticipate that these conditions will continue to impact the market in May, but they might start to ease toward the end of the month and into June.

Freight volume is up at key airports in Asia 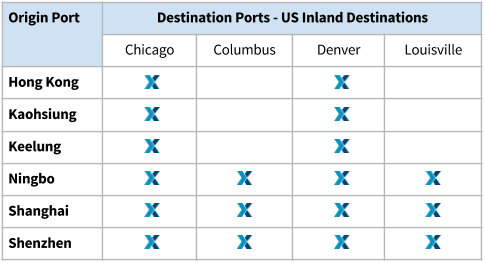 If you move LCL from Shanghai to Los Angeles, ask your Flexport team about our new Matson service! Matson is a premium carrier that offers 10-day guaranteed port-to-port transit time -- 5-7 days shorter than competing services on this lane.