Recent news and updates related to the ocean and air freight market for the month of June 2017. 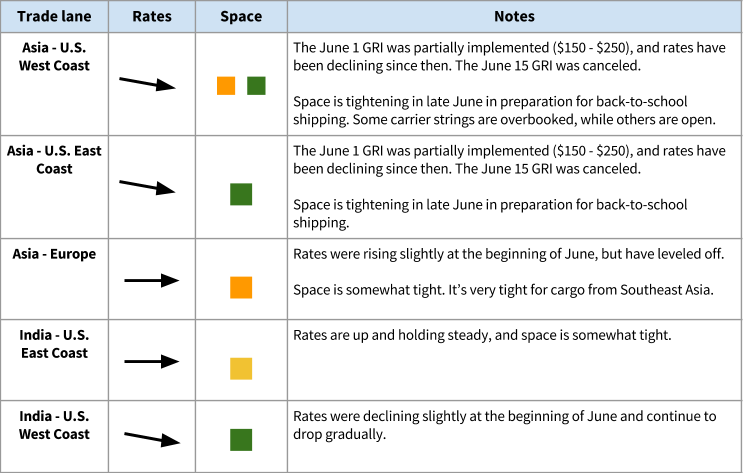 Peak season will kick off in July, which means that PSS may be applicable starting July 15.

Space will tighten for Asia - US

Space from Asia to the U.S. is expected to tighten beginning in late June or early July for back-to-school shipping.

Equipment shortages at China base ports

We’re seeing scarce equipment at China base ports, especially Shanghai, Ningbo, and Shenzhen. We suggest booking and picking up empty containers as early as possible to maximize container availability.

Ramadan began on May 27. We’ll see blank sailings, delays, and congestion at many South Asian ports, due to reduced working hours and public holidays.

NOR: A good alternative when space is tight

This time of year, we see a lot of reefers (refrigerated containers) bringing fresh produce from U.S. markets to Asia -- but there isn’t nearly as much produce for them to ship from Asia back to the U.S. This means that carriers are searching for products to fill up those empty reefer containers back to the U.S. (otherwise, it’s wasted space for them). Ask us if non-operating reefers (NORs) are a good fit for you!

Hapag-Lloyd and UASC have completed their merger. We don’t expect this to impact rates or capacity (no capacity is being removed), and each will continue to act as their own line. For now, it will mainly serve to reduce costs for the newly joint company, allowing for increased efficiency. '

Congestion continues at the Port of Shanghai, caused in part by the April 1 ocean alliance reshuffle, and also by bad weather. Moving into summer, the weather should improve, and we expect congestion to ease as well.

Air freight capacity ex-Asia continues to be tight, with year-over-year demand growth expected to continue in the double digits for Q2, following a 15% increase in March and a strong acceleration in May.

Tight capacity continues to be driven by three main factors:

Prices are still high and show no signs of dropping

Slack season is usually April-June, but we have experienced a sustained peak that began after Chinese New Year at the end of January; we expect this to continue and for rates to remain high for the rest of Q2.

At this point, there are no indications the market will ease up. Specifically, we've seen two Taiwanese carriers announce significant rate increases of 10-15%. Also, carriers are beginning to implement separate fuel surcharges - a change from all-in rates - to account for fluctuations in fuel costs.

This graph shows the increase in cargo throughput at major airports: 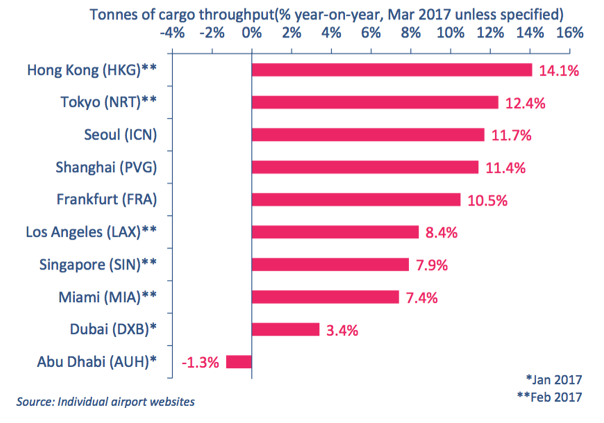 Flexport's in-house LCL consolidation service is now operating on 60 lanes into the US, Canada, and the UK out of major China base ports and Taiwan. View the full list of lanes here.

If you move LCL from Shanghai to Los Angeles, ask your Flexport team about our premium Matson service, with 10-day port-to-port transit time. This service guarantees vessel discharge within 1 day of arrival at port, and we're able to pick it up for deconsolidation immediately.

At the beginning of June, we’re seeing congestion at some Seattle-Tacoma port terminals, due to an increase in new business from the ocean alliance reshuffle. You may see delays as a result of long trucking wait times.