Ocean, trucking, and air freight rates and trends for the week of January 9, 2018. 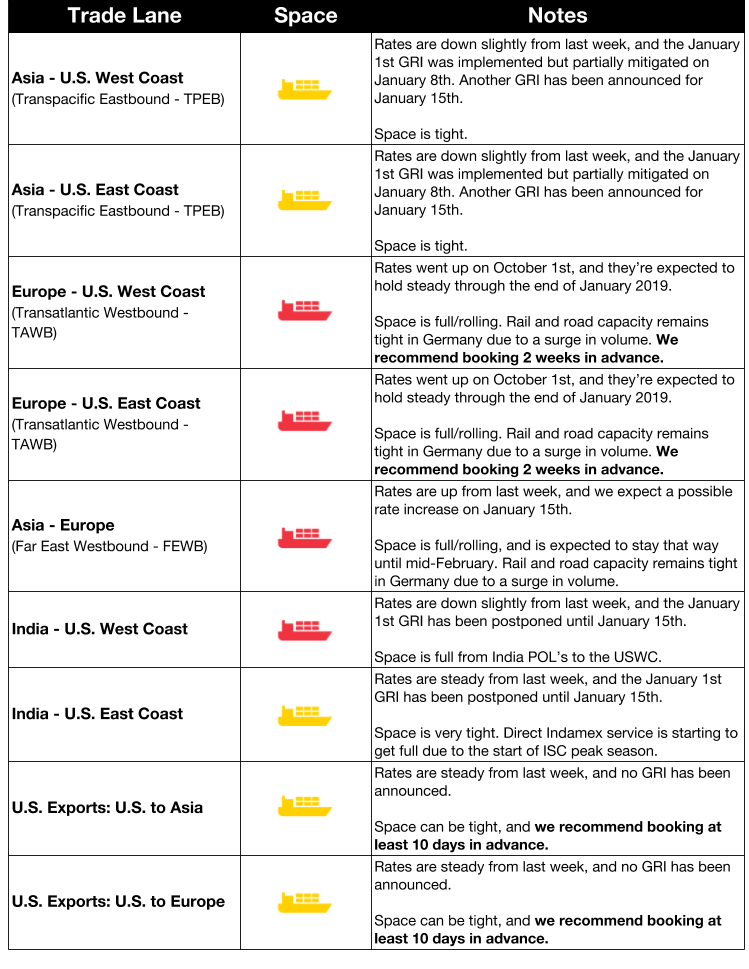 UK ports are very congested, which is causing tight trucking capacity and a decline in port productivity. This congestion is expected to continue through late January. The cost of transporting a container inland from a UK port has also risen significantly, between 10% and 40%. Trucking currently needs to be booked 14 days in advance.

270 containers went overboard last week off the coast of the Netherlands, washing goods up on the shores of Dutch islands. These types of incidents are rare; between 2008 and 2016 only 1,582 containers were lost at sea, out of the 130 million containers handled annually. However, this is a reminder to always be prepared with cargo insurance, because you never know when containers may be incorrectly stowed. 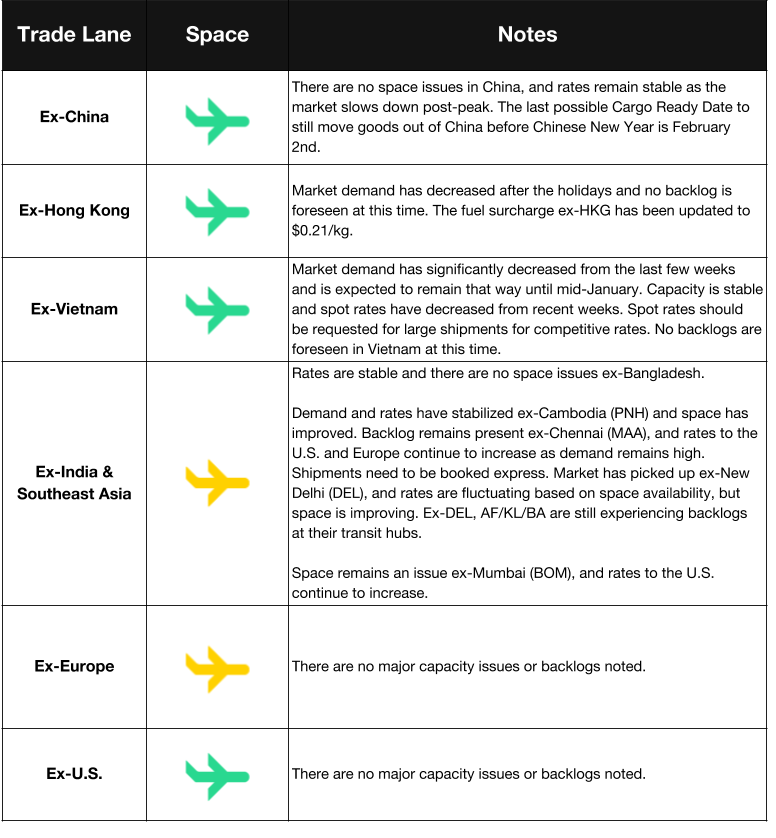 Air traffic and cargo are still moving without delay as we push through the third week of the government shutdown, but officials worry that if the shutdown continues, delays will begin to snowball and shut down supply chains. TSA and Homeland Security are both affected, as is the FDA and the Federal Aviation Administration, so any activity that requires licenses or permits from these agencies have been put on hold. There is no sign of a resolution coming soon.

The short-term reaction to chaos caused by Brexit and the U.S. and China trade war is to ship via air to avoid the risk of delayed goods. This has been a positive boost for air, although the long-term effects for the market are still unclear.

The UK’s Department of Transport has contracted three carriers to keep freight moving in the event of a no-deal Brexit in March. If the UK leaves the EU without a trade deal in place, vessels will call on the ports of Poole, Portsmouth, and Plymouth to transport cargo across the English Channel. However, officials warn that even with these preparations, significant trade disruptions would be unavoidable.

Abandoned Manston Airfield was used this week to trial congestion logistics to prepare for the possibility of a no-deal Brexit. Fewer than 90 trucks arrived, with some sources saying it was a failure in its attempt to prepare for the scenario that the airfield will need to hold 4,000+ trucks. The UK’s Department of Transport, however, argued that the trial was a success.

The US Trade Representative has issued the first list of exclusions from the China 301 tariffs for items covered under List 1, $34 billion worth of Chinese goods.  These exclusions will apply retroactively to July 6, 2018, the implementation date of List 1, but until the partial government shutdown ends and the Harmonized Tariff System (HTS) can be updated these exclusions may not be used on a Customs entry.  The full list of HTS codes and descriptions can be found on the USTR website.

The Customs Automated Commercial Environment (ACE) system is processing customs entries and most cargo is still continuing to move.  However, not all Customs offices and other government agency offices are fully staffed, impacting the timely movement of inbound shipments. Entry liquidation is continuing since it’s a system generated function, but the back-office process of issuing refund checks is not taking place. Any expected refunds will be delayed.

Customs and Border Protection (CBP) has posted a final version of the new 5106 form expected to be launched in February. The 5106 will register an importer with CBP, and will be required of all new importer identities. The new form requires personal information about company owners and officers (information like their Social Security or passport numbers). CBP will allow importers to file this form directly with them so that the importer’s broker will not have to request confidential information. CBP will use these new details for security screening and to associate any related importers with one another.