Ocean and air freight rates and trends, and trucking and customs news for the week of January 23, 2019.

Rail movement in the Midwest and Canada is delayed as temperatures drop. Railcars are shortened and trains are slowed in an effort to not ruin the tracks or brakes when the temperature falls below -25℃, causing longer transit times, idling rail cars, and congestion at ocean ports because containers can't be loaded onto the rail. For more information, see CN's video on cold rail conditions. 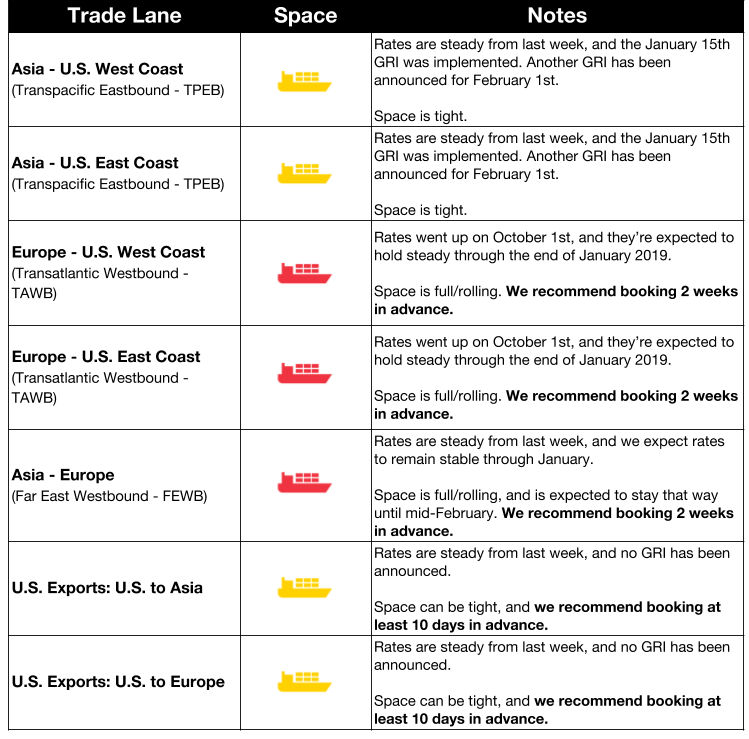 The Ocean Alliance, comprised of CMA CGM, COSCO, Evergreen, and OOCL announced a network revamp that will be launched in April. According to OOCL co-chief executive Andy Tung, the alliance’s updates will ensure “customers are well served with the best selection and most competitive suite of products.” The 330 container vessels across 38 service will include a new seventh loop to its Asia-North Europe string, although capacity is still expected to be cut on the Asia-Europe lane.

The carriers also extended their alliance agreement to 2027, locking them in as the ocean alliance with the most capacity.

Georgia Ports is investing $2B in Savannah’s container port, Garden City Terminal, over the next 10 years. The port wants to start competing with west coast ports Los Angeles and Long Beach on cost and speed to the Midwest by improving intermodal facilities and vessel turnaround times. They plan on increasing capacity ahead of demand to avoid congestion.

Whether they install scrubbers, build new vessels, or use higher-quality fuel, carriers will need to make significant changes to comply with the new regulations, and those changes will come at a cost to shippers. Freight rates may climb between now and 2020 as a result. Fuel costs across the board are also expected to rise around 2020.

10 container vessels have already been scrapped in 2019 as of January 17th, a high number compared to the 54 vessels scrapped in the whole of 2018. 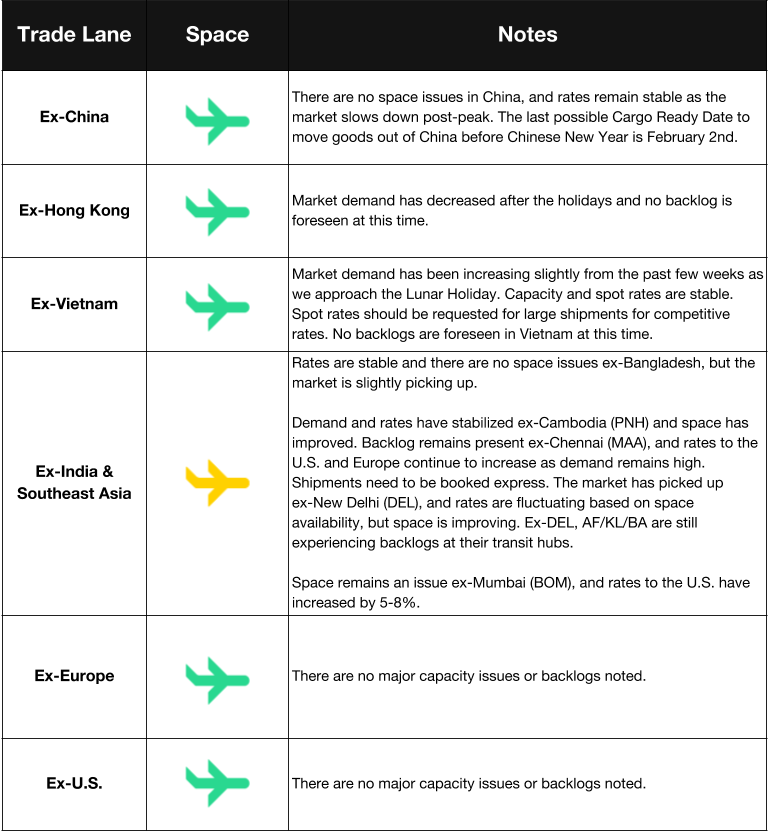 The autonomous air taxi is designed to carry passengers, not freight, but the success of such a transportation mode could transform urban transit. Airbus SE, Textron Inc., Intel Corp., and Uber Technologies Inc. are all investing in or developing similar technologies, although it will likely be years before we start seeing autonomous air vehicles regularly in the skies.

The air market is weakening ahead of Chinese New Year, despite the rush to move goods out of China before the holiday, but the industry feels confident they’ll be able to bring prices back up. Airlines do more negotiating than do shipping lines, and have grown to anticipate peaks and lows, helping them smooth out rate volatility.

Passenger transport has started to be affected by the government shutdown, as the lack of paychecks has caused TSA employee absenteeism, and air traffic controllers to file a lawsuit against the government. Air cargo is also starting to see a delay, because the necessary paperwork can’t be filed.

Maersk to Offer Street Turn Services in the U.S.

Street turns are already well known in the U.S., but Avantida has announced that Maersk has started to offer street turn services on their platform in the U.S. and Canada. With this automated request process, companies are freed from manually requesting and processing street turns. The digital process is more efficient and will help encourage the reduction of CO2 emissions.

Also in street turn news this week, however, is the defense of the high charges carriers are charging, which shippers have called “insane.” These fees are ranging between $30 and $75 a container.

If the government shutdown continues, we could see trucking delays at U.S. borders, similar to those we’re seeing at airports. Transportation Security Administration (TSA) has had to shut down some security lanes due to absenteeism, and we may see that happen at border crossings. Government agencies are responsible for customs clearance and with no end to the longest U.S. government shutdown on record in sight, trucks at borders may start to be delayed.

Amazon is advising its FBA sellers to stock up with at least four weeks worth of inventory in case the UK leaves the EU in March without a trade deal in place. Delays in trucking and customs clearance are expected in the event of a no-deal Brexit, and the resulting longer shipping times may make UK products less competitive.

This port congestion is also starting to spread inland, where inland ports are experiencing chassis and trucker shortages and shippers are getting stuck with demurrage charges.

First Sale Usage and Enforcement on the Rise

Since the tariff implementation, there’s been a large spike in the number of importers who are using first sale valuation rules to lessen the tariffs’ financial impact on their business. During the rush to change their value declarations, many importers have not properly set up their first sale programs or haven’t reviewed the middleman transactions carefully enough. CBP is now targeting importers who use the first sale rules for valuation through audits. They’re focusing on industries that were very low duty, or duty-free goods that are now 10% or more after the tariff implementation.

Six Star Wholesale was ordered to pay over $500k in penalties and unpaid duties for misclassifying products subject to anti-dumping duties. They misclassified 27 entries for coat hangers, and 14 entries for bags. The company did not respond to the penalty notices or appear to defend themselves in the Court of International Trade. They were found guilty of not using reasonable care and were ordered to pay $526,684 in missing duties and fines.

For a weekly roundup of tariff-related news, subscribe to our Tariff Insider.