Ocean, trucking, and air freight rates and trends for the week of January 2, 2019. 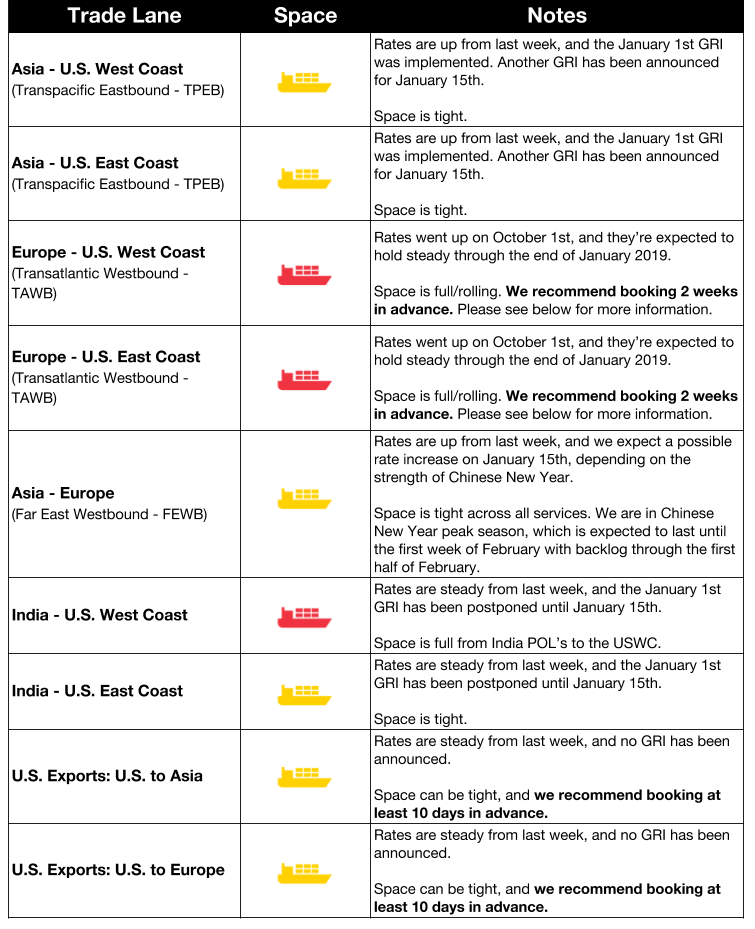 UK ports are very congested, which is causing tight trucking capacity and a decline in port productivity. The tight congestion is expected to continue through late January when Chinese New Year cargo will arrive. Rail and road capacity is also tight in Germany due to a surge in volume.

THE Alliance to Improve Asia-Europe Service

THE Alliance has announced that a new service network will begin after Chinese New Year in 2019 and will replace the FE1 Asia-North Europe loop and the PS1 and PS2 Asia-US west coast services. The revamped Asia-Europe service is intended to increase capacity and service quality.

The 2M alliance will add six more ultra large container vessels to its 10 Asia-Europe strings and drop eight port of callings starting in March of 2019. The changes are intended to improve schedule reliability, although the alliance noted that vessels are still subject to delays with the extreme port congestion some terminals (like Felixstowe) are experiencing. The trade lane’s capacity will not increase because of anticipated further slow steaming related to IMO 2020 (see below). 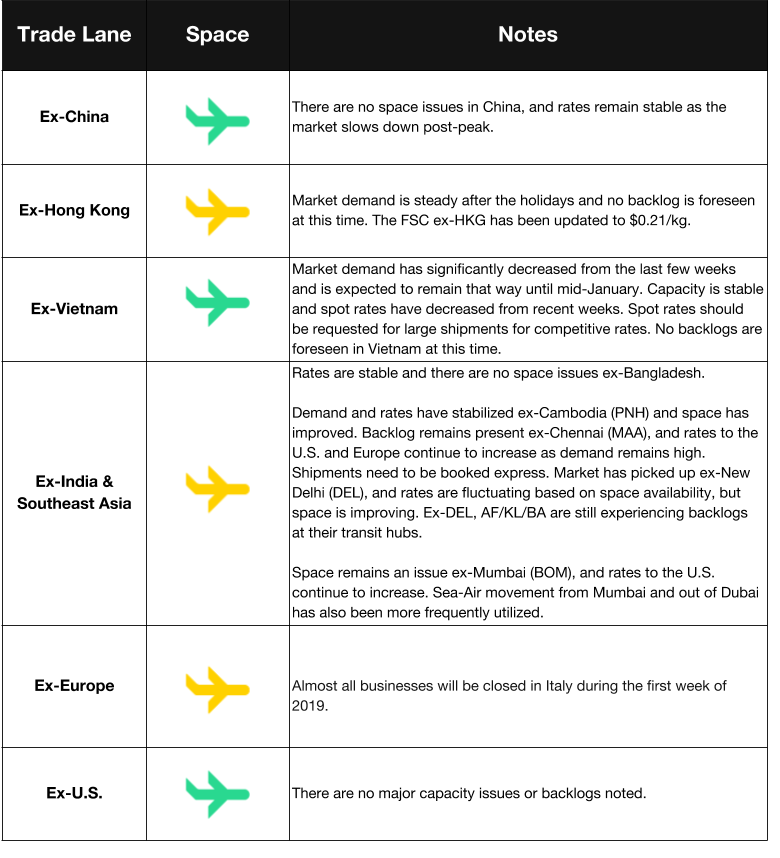 Electronic Logging Devices (ELDs) were mandated for the trucking industry, but it’s also affecting air freight. ELDs have increased rates and transit times for deliveries that are a certain distance from the airport, as well as increased congestion at airports as trucking capacity has been tightened.

Air Cargo World has put together a list of air freight trends that we can expect to see in 2019. E-commerce volume is expected to increase, and more automated and digitized systems are expected to be introduced. We can also expect to deal with the unexpected, as the air market will have to adapt as necessary to the U.S. and China trade war and Brexit.

Fewer longshoremen were working during the holidays and with closures and shortened hours at the ports of L.A. and Long Beach, congestion is expected to continue as the backlog is worked through. However, the port wants to decrease congestion and dwell times in the future by finding a solution to chassis shortages and fixing truck appointment systems.

Trucking is also expected to be severely impacted if the UK leaves the EU without a negotiated trade deal in place. An abandoned airfield in Southern England will be used as a holding area for trucks in anticipation of a massive traffic jam.

Companies are stockpiling goods in the UK in anticipation of possible border disruptions after Brexit. A trade deal may not be negotiated before the UK’s planned exit from the European Union in March, so businesses are putting together stock and import plans to avoid a shutdown.

Warehouse availability in the U.S. is at an all-time low of 4.3%, so U.S. companies are using truck trailers as a short-term storage solution. Holiday season inventory and the rush to import goods into the U.S. in advance of the tariffs have strained warehousing so these trailers are stocked with goods and parked in warehouse lots or behind stores, to be used until some of that inventory is cleared out.

The Federal Motor Carrier Safety Administration (FMCSA) has prohibited California from enforcing their meal and rest break laws for truckers. Previously, these laws, to take a meal break every five hours and a rest break every four hours applied to trucking carriers, but the FMCSA ruled that these laws posed a safety risk and decreased productivity. The federal hours-of-service rules will apply instead, which include a limit on daily driving time and require a 30-minute break after eight hours.