Ocean and air freight rates and trends; trucking and customs news for the week of February 6th, 2019.

Rail movement in the Midwest and Canada is delayed as temperatures drop. Railcars are shortened and trains are slowed in an effort to not ruin the tracks or brakes when the temperature falls below -25℃. This causes longer transit times, idling rail cars, and congestion at ocean ports because containers can't be loaded onto the rail. For more information, see CN's video on cold rail conditions. 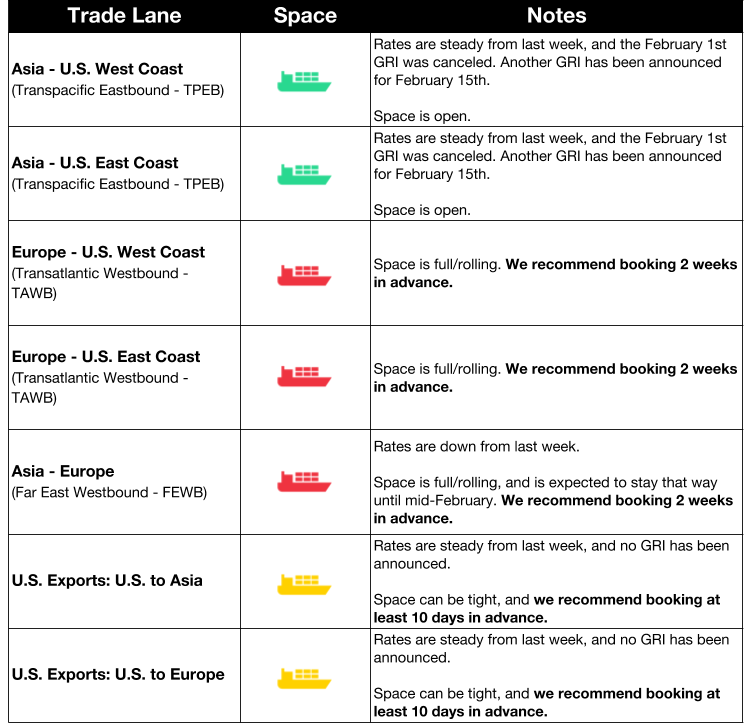 A number of blank sailings have been announced around Chinese New Year. More information and a list of the affected ports and strings is available on our blog.

APL Vancouver caught fire on January 31st, and general average will likely be declared. However, more than half of the containers are estimated to not be covered under insurance, so the goods will have to be auctioned off to pay for the damages. 4,500 containers were onboard, and 100 of them were loaded with hazardous materials. 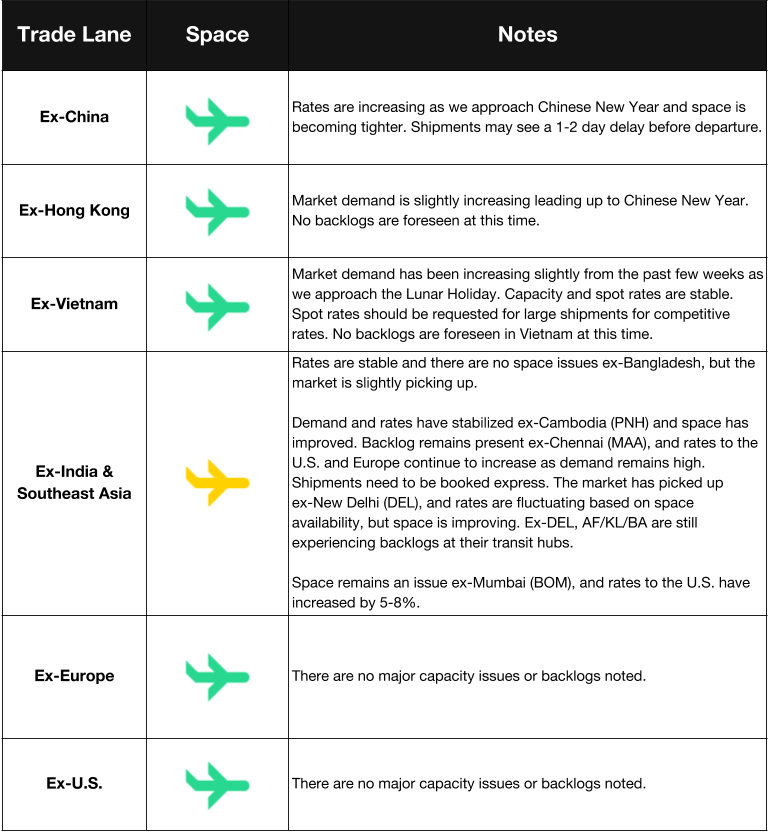 Government Shutdown Will Have Lasting Effects

The partial government shutdown may have finally been put on pause after 35 days, but that doesn’t mean the air market will return to normal. The lack of paychecks put stress on air traffic controllers, which has resulted in more errors made on the job, and threatens an increased rate in retirement. The shutdown also impacted training for new air traffic controllers, putting the field at risk for underemployment.

New truck orders are down 26% from December of 2018, leading to beliefs that 2018’s record highs weren’t as indicative of a high volume of physical deliveries in 2019 as had been hoped. Order cancellations grew from 5% at the beginning of 2018 to 20% by the end of the quarter.

e.l.f cosmetics Inc. (ELF) agreed to pay $996,080 to settle a civil liability suit where OFAC (Office of Foreign Assets Control) found them liable for 156 violations of the North Korean Sanctions Regulations. They imported 156 shipments of eyelash kits from China between 4/2012 to 1/2017, and 80% of the eyelash kits contained North Korean materials. ELF was found to have an inadequate or non-existent compliance program in place during that time period and the very limited oversight to quality assurance pertaining to the production process, raw materials, and end-product which resulted in the violations. The violations were submitted with a prior disclosure and the company worked with OFAC throughout the process and were able to mitigate the fine from a possible $2.2M. OFAC was satisfied with the compliance programs and supply chain changes they put in place since verifying country of origin and supplier auditing.

ALE USA Inc. received a response from CBP on their ruling request to determine the origin of their group of products that entailed ethernet switches, routers, and network cards. The metal fabrication was made in Taiwan, and their hardware was assembled in China. Other components were added such as resistors, diodes, integrated circuits, circuit cards, etc. from various Asian origin countries. ALE wrote that the programming/testing done in China was merely to verify the correct assembly of the product and the hardware was still missing the major portion of its programming leaving the item not capable of functioning as an Ethernet router. They were imported into the US where the memory capabilities, data management, and operating systems were programmed in. The company argued that because the item would not function until the devices were programmed in the US, it should be counted as US origin. Final tests and quality assurance was done, and then it was packaged for retail. CBP agreed with ALE and stated in the ruling "it is only after the installation of US-origin software that the devices obtain their essence and functionality as switches and routers."

Yearly, Corporate Compliance Insights puts out a list of interesting court cases that were settled during the year. This is a good read to find out what companies got caught violating international laws along with the circumstances that got them in trouble.

For a roundup of tariff-related news, subscribe to our Tariff Insider_. _