Ocean and air freight rates and trends for the week of February 14, 2018. 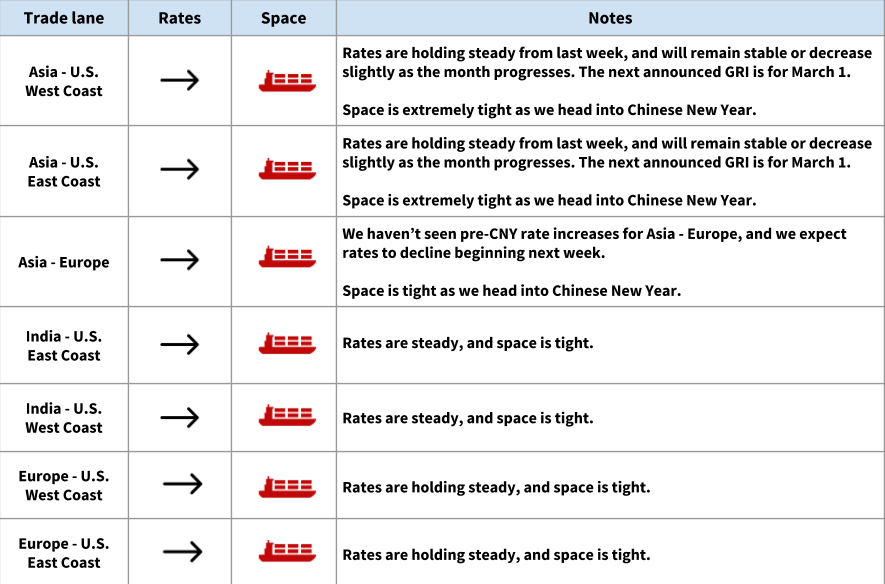 **Rates are steady; no GRI announced until March 1 **

Rates are looking much like they did last week, and we expect further stability -- or even a slight decrease -- throughout the rest of the month.

Carriers have announced a GRI for March 1.

Space is very tight on the eve of Chinese New Year

As is typical for this time of year, capacity is extremely constrained out of China in advance of Chinese New Year -- particularly from Asia to the U.S. Carriers will implement blank sailings for the week following CNY, in an effort to more closely align supply and demand.

Rates are up slightly ex-HKG

As air freight gets its final pre-CNY push, capacity is especially tight out of Hong Kong, and rates are up slightly. We may also see some flight cancellations after Chinese New Year.

Capacity is not terribly constrained out of China

A later-than-usual Chinese New Year is expected to minimize major capacity constraints out of China.

Import volume is up and ports are congested -- and, at the same time, capacity has been removed from the market due to the ELD mandate.

On top of that, there’s a significant driver shortage, and trucking companies are struggling with retention. Winter weather throws another wrench into the situation.

Many U.S. ports are busy this time of year, but the situation is especially congested in Savannah, Chicago, and Houston (as it has been for weeks). If your cargo is routing through any of these ports, you may encounter delays and fees (such as trucking wait fees, chassis split fees, or demurrage).