Ocean and air freight rates and trends; customs and trade industry news for the week of December 18, 2019. 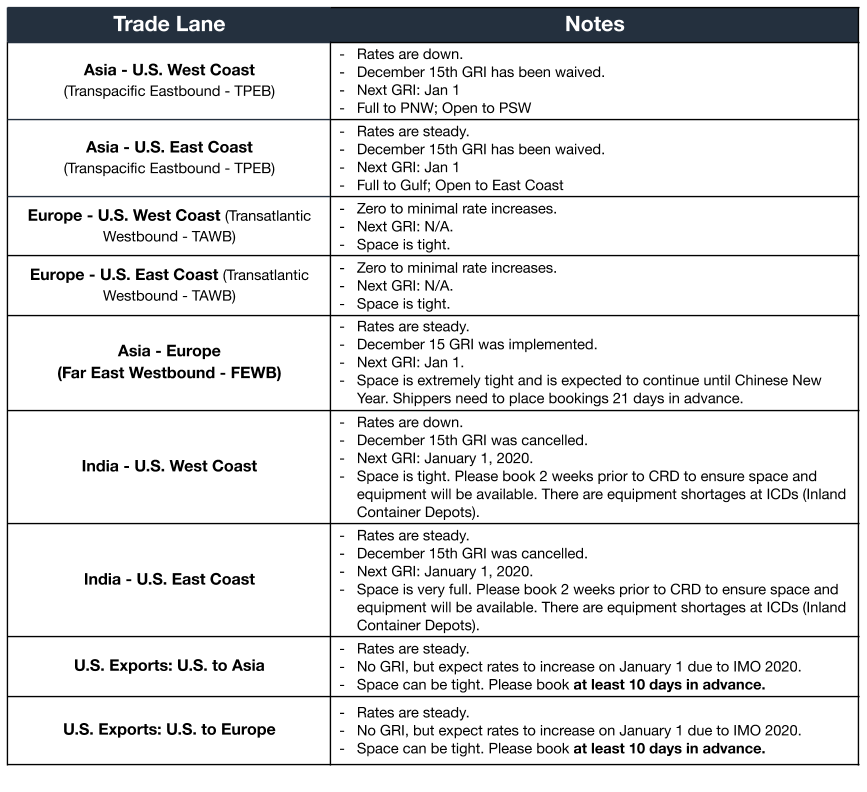 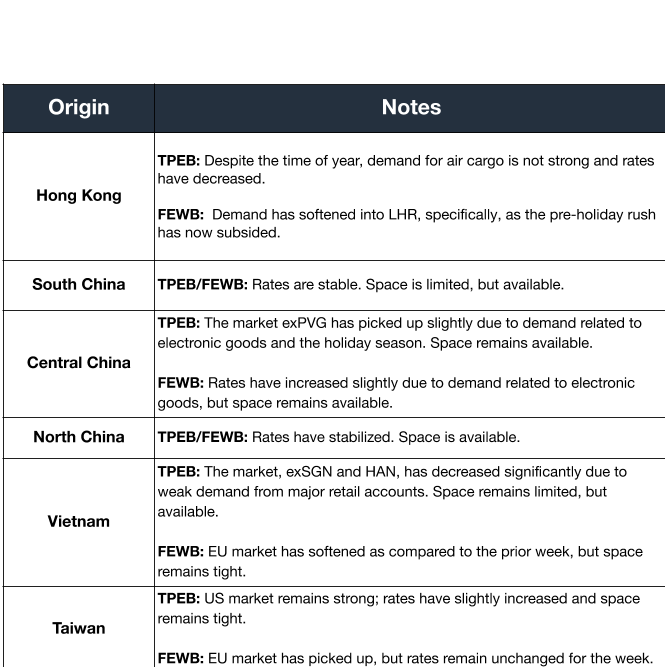 USMCA Agreed and Signed The United States, Mexico, and Canada signed the rewrite of the NAFTA replacement, which will come into force if all three legislatures pass it. Despite Senate Republicans complaining they had been excluded from the renegotiation, the Trump administration sent implementing legislation to Congress and both houses seem likely to pass the deal.

Looser US Fuel Rules Aim to Ease IMO 2020 The @EPA has cleared #IMO2020 compliant fuel with a higher sulfur content of 0.5% to be sold for use outside the emissions control area, which limits sulfur content to 0.1%. Freightwaves reports the clearance allays alarm over higher prices or potential non-availability of cleaner fuel.

China Deal, Phase One, Take Two 15% tariffs scheduled for the weekend were called off after the Trump Administration resolved the specifics of a deal with the PRC.

Section 301 Updates After progress on the Phase One trade deal with China, a Presidential tweet and the USTR website both report that the 15% 4b tariffs scheduled to take effect last Sunday are suspended. Without specifying when, the President also said that list 4a would be reduced from 15% to 7.5%. Many believe this will take place in early January, when the Phase One Deal is expected to be signed.

New Exclusions Granted - The USTR granted exclusions to 35 specifically prepared product descriptions from list 3. The exclusions are retroactive to September 24th, 2018 and will be effective until August 7th, 2020. The USTR also granted exclusions for HTS 9030.90.4600 and 9030.10, which are for list 1. These will be retroactive from July 6th, 2018, and will remain in effect until October 1st, 2020. Changes were also made to the second list.

Mandatory ACE filings for APHIS Products We anticipate that the Federal Register Notice posted in January will lay out the new requirements for 2,052 specific HTS numbers that are subject to APHIS. Licenses and permits that importers currently get in paper form will need to be uploaded to ACE. To help importers and brokers understand the new process and 6 month implementation period, APHIS plans to host a series of webinars in February. For now, two CATAIR documents on these changes are here and here.

CBP Trade Remedy Email After confusion surrounding the exclusions to 301, 232, & 201 duties, CBP shared a general email address for questions from the trade community (traderemedy@cbp.dhs.gov). The releveant sections of the USTR, CBP, & DOC websites have also been revamped.