Recent news and updates related to the ocean and air freight market for the week of August 15, 2017.

We publish a market update every week. Subscribe to these updates here! 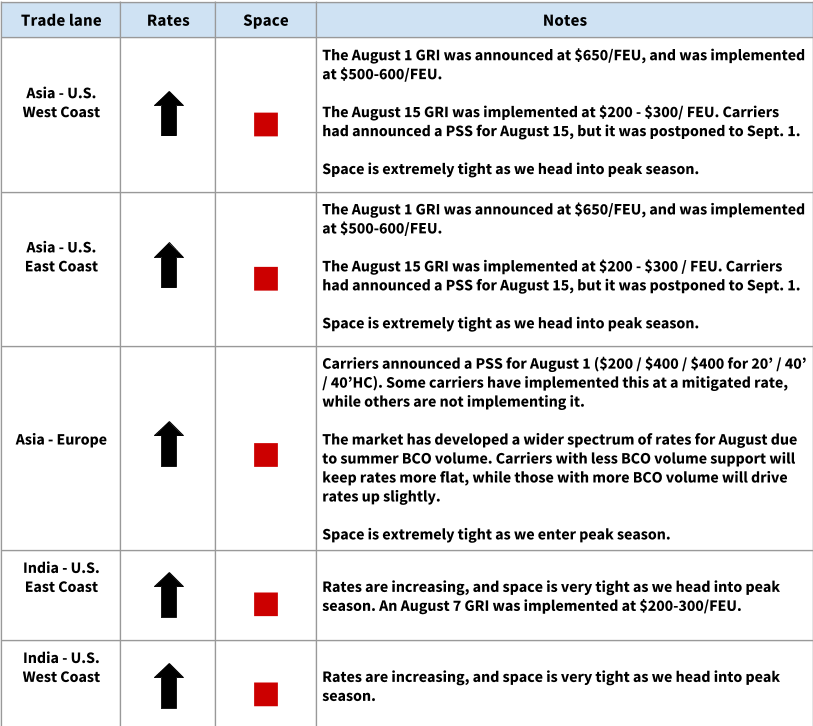 Volumes are up as businesses prepare for the winter holidays, and prices are rising. Space is very tight on all major lanes. As rates fluctuate, keep in mind that Flexport rates are always inclusive of GRI and PSS.

How can I keep things running smoothly during peak season?

For more peak season tips, check out our webinar on preparing for peak season.

Look for more Asia-USEC services to go via the Panama Canal next year, as capacity continues to increase along this route.

THE Alliance (one of the three ocean carrier alliances) has created a fund to continue operations (e.g. dock at terminals, unload ships, etc.) in the case of financial insolvency of any member. This safeguard is being put in place to avoid the type of situation we saw last year with the Hanjin bankruptcy.

Prices are high, and space is tight

As we’ve noted in previous updates, this has been a huge year for air freight -- rates have stayed high and will rise further in peak season. Demand has continued to outpace supply.

The trans-Pacific air market, in particular, is very strong; for example, United Cargo’s revenues were up 22% year-over-year as a result of increased volumes.

Hot weather in Northern China contributes to the crunch

It’s been very hot in Northern China recently, which has resulted in delays and offloaded cargo out of PVG. This contributes to the capacity crunch that has been keeping rates high.

Note: Hotter air is less dense; less density impacts an airplane’s ability to lift. This means that in hotter weather, a plane must be lighter in order to take off, which may result in more offloaded cargo and more grounded flights if temperatures continue to rise.

**China and Taiwan: project cargo is filling up planes **

Back-to-school products and other project cargo are taking up a lot of space in planes out of China and Taiwan. This will keep putting a strain on capacity throughout August.

Rates are expected to stay strong and volatile in Eastern China (including Shanghai). Rates will be a bit more stable out of Southern China.

HKG has been operating at capacity, supporting exports out of Southern China. Rates are expected to stay strong out of HKG.

In Northern Europe, Flexport’s in-house LCL service has expanded to include Rotterdam and Hamburg (from China base ports). New inland U.S. destinations include Minneapolis and Salt Lake City.

Check out all of the Flexport LCL lanes here!

The CN Harvey rail ramp in Chicago is experiencing a chassis shortage. This will affect cargo that’s routed through Chicago from Vancouver or Prince Rupert -- you may see chassis split fees and/or storage fees if your trucker needs to make an extra trip to pick up a chassis.

There is major congestion at JFK, ORD, ATL, and LAX, with truckers reporting long wait times to pick up cargo (we’ve heard of wait times as long as 6 hours at JFK). This may mean delivery delays and trucking wait fees if your cargo is moving through one of those four airports -- and we expect the congestion to become more severe as peak season continues.

Last month’s Petya cyberattack caused temporary closures of APM terminals worldwide. The APM terminal in New Jersey is still not 100% operational, so there’s quite a bit of congestion at the port of New Jersey and at that port’s APM terminal specifically.