Ocean and air freight rates and trends; trucking and customs news for the week of August 14, 2019. 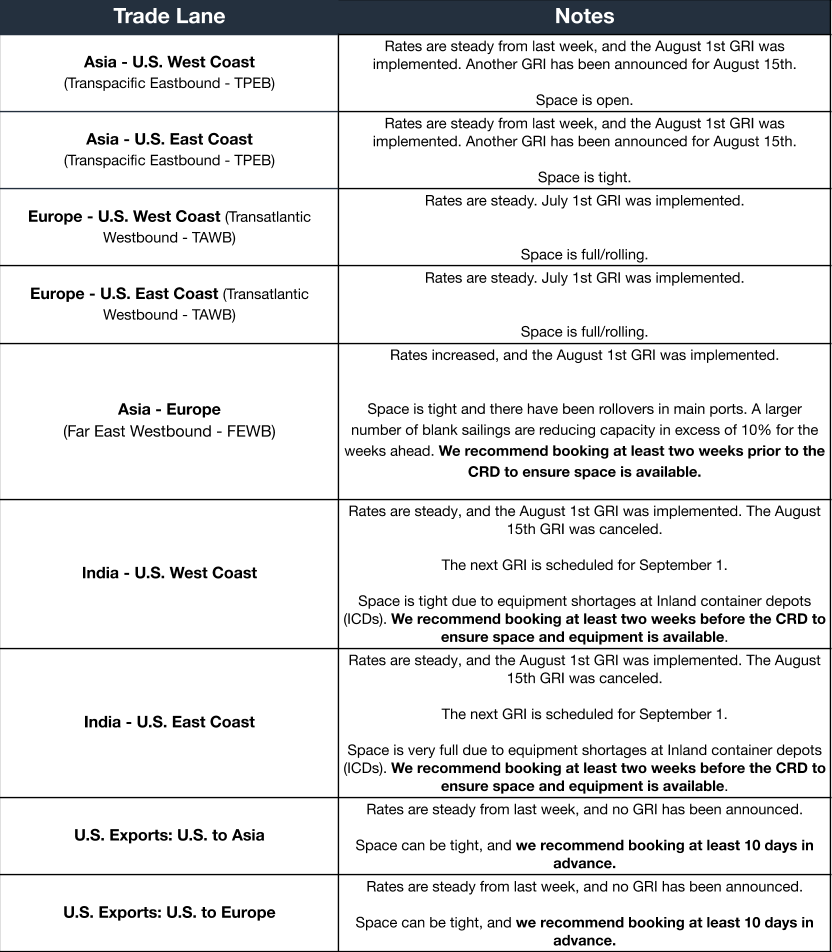 Shoemaker Boosts Inventory Ahead of New Tariff Announcement Wolverine Worldwide, the company responsible for shoe brands Sperry, Saucony, and Keds has increased its Q3 inventory by 30% in advance of a 10% increased tariff on footwear. The company is also actively looking for ways to reduce imports from China.

China Refuses U.S. Warships Entry to Hong Kong Port Amid the rising tensions of the ongoing trade war and protests at the Hong Kong International Airport, the Chinese government has denied permission for the USS Green Bay and the USS Lake Erie to enter the global trade hub.

Flights Canceled Out of Hong Kong International Airport All departing flights are cancelled exHKG as of 5pm HKT, August 12.

Typhoon Leads to Canceled Flights across China 600+ flights at airports in Beijing, Shanghai, Guangzhou, Shenzhen, and Chengdu were cancelled over the weekend due to Typhoon Lekima. The storm has since passed but expect delays as airlines work through the backlog. 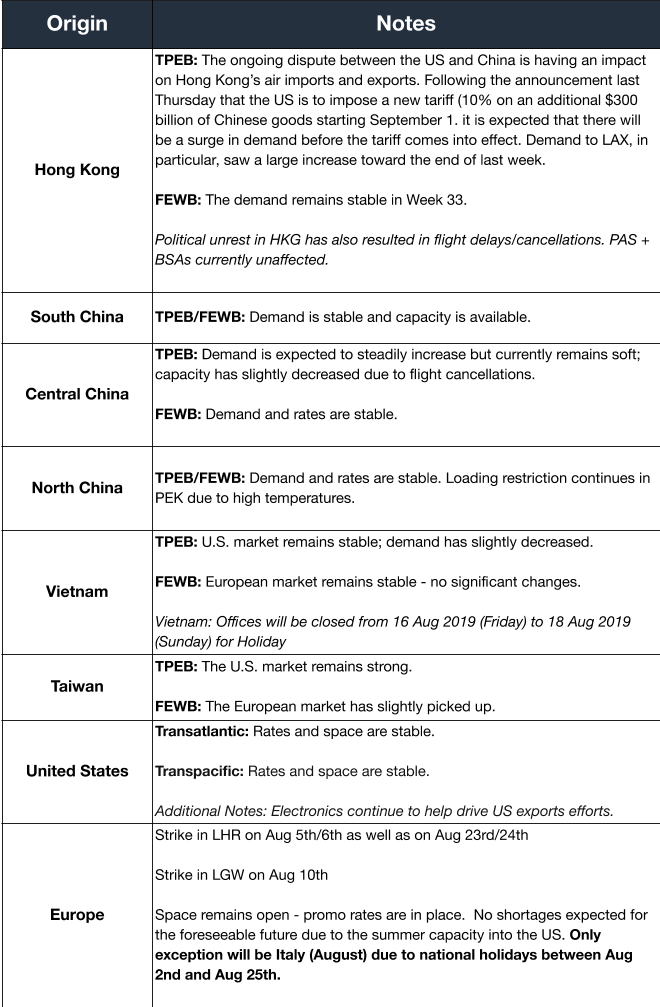 Section 301 Tariffs List 4 Split to Two Implementation Dates The fourth list of section 301 tariffs is going into effect on September 1st as originally tweeted by President Trump, however, there was a USTR release today that stated list 4 will now be split into two lists (4a and 4b). The first list going into effect on September 1st, and the second list will go into effect starting on December 15th. Both lists will add a 10 percent tariff to the current rates on those HTS numbers. The 4b list of 650+ HTS commodities that were pushed back to December 15th included electronics, toys, some clothing, food, camping gear, sports equipment, watches, small appliances, and baby items.

USTR Issued Product Exclusions for Third Tranche of Section 301 Tariffs The USTR has already released the first list of excluded products for the third list of section 301 tariffs. It was surprising to see the exclusions released while the exclusion portal remains open until September 30th. All of the previous exclusion lists came out well after the exclusions were due, but the new online system possibly helped streamline requests. The exclusions are retroactive to the September 24, 2018 date when they were implemented at 10 percent, and also include when the tariffs were raised to 25 percent. The exclusions will remain in effect for one year from the notice date.

COAC Looking to Prevent Counterfeit Goods with Possible "Denied Commodity Lists" The Commercial Customs Operations Advisory Committee said in comments they are going to work on cracking down on IPR theft possibly through a "Denied Commodity List". The list would hopefully help producers and suppliers identify "authentic" items that are sold online in 3rd party marketplaces. They are requesting comments from stakeholders in hopes that the process which is created addresses many of the IP theft issues that have come up. The list would likely flag high-risk commodities, suppliers, countries, inconsistent paperwork, etc. They also aim to improve the visibility between customs and the IP stakeholders.