How will businesses recover from COVID-19? And how can you ensure your cargo is moving when they do? Visit Flexport’s COVID-19 Trade Insights for information and analysis. 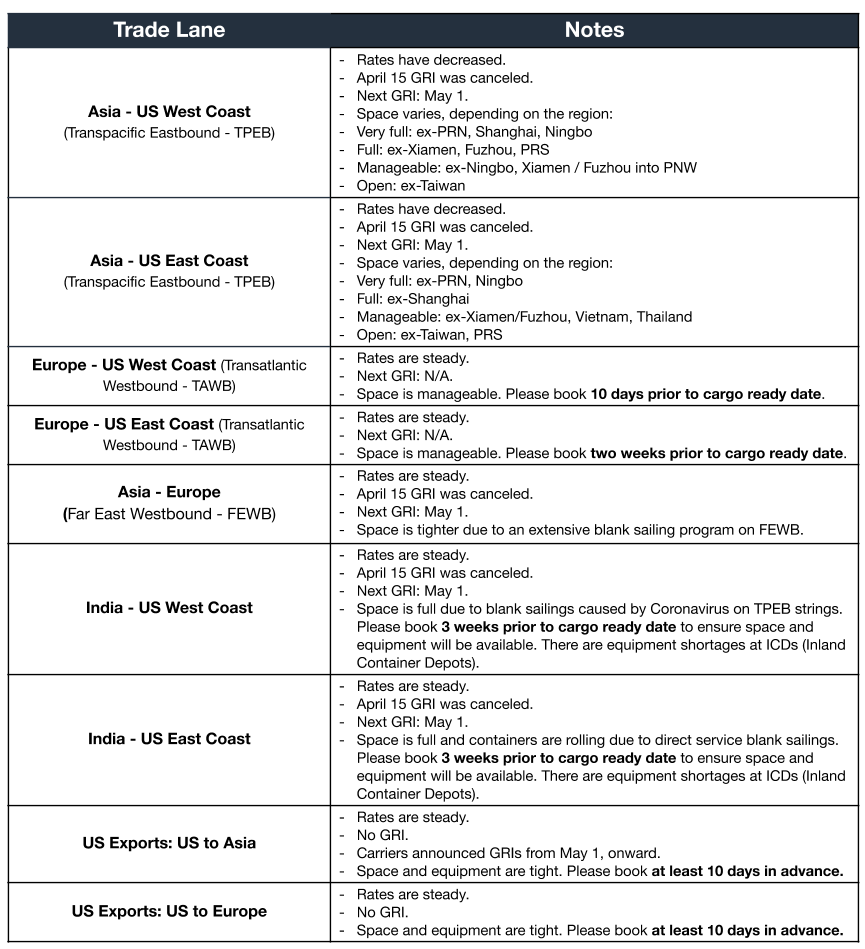 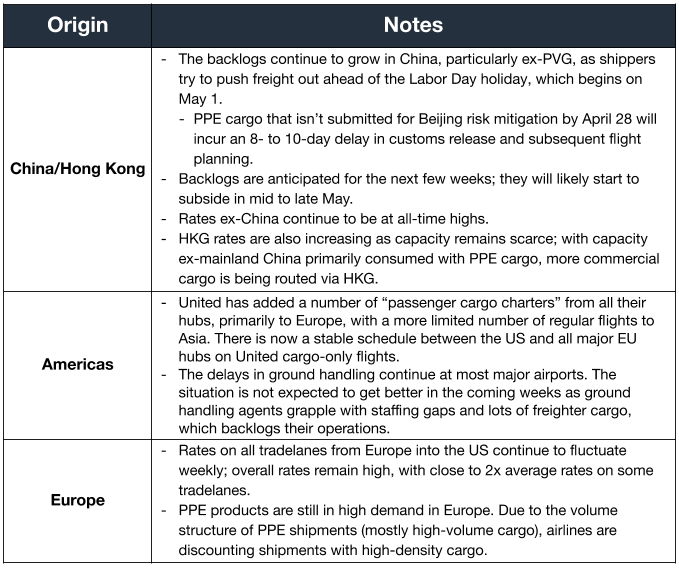 COVID Won’t Cancel Zero-Carbon The EU is proposing to increase its current 2030 target of reducing greenhouse gas emissions by at least 40%, based on 1990 levels, to at least 50%, reports JOC. That’s despite COVID-related trade shifts that include sailing around Africa now that marine fuel oil prices make the longer route cheaper than Suez Canal fees. The IMO and individual carriers also confirmed their environmental commitments, just ahead of Earth Day.

Oil Glut Creates Super-Contango Despite hard-bargained agreements to reduce oil production, the world is struggling with how to store crude oil, causing a super-contango situation where spot pricing is more favorable than futures. A combination of travel bans, shelter orders, and blank sailings have caused prices to hit historic below-zero levels this week, according to WSJ.

What is clear is that we are embarking upon an extraordinary and tumultuous time. The rapid changes in economies will put a premium on agility and efficiency. Taking stock of the Coronavirus pandemic’s economic impact, this is anything but business as usual.

Duty Deferral Available for Some March and April Imports This past weekend, there was a flurry of duty deferral releases that included two Cargo Systems Messaging Service (CSMS) messages (one stating process and another stating what is included), a Presidential Proclamation, and a temporary final rule. In these notices, CBP stated they are extending the deadline for duty payments on imports from March 13-30 and all of April by 90 days for shipments that have not yet been paid. As long as the importer can prove financial hardship (based on required specifications) and the items in question are formal entries that are not subject to ADD/CVD or any of the Section 232/301/201 duties, then the importer qualifies for the deferral. CBP also posted an FAQ on its site.

The Commercial Customs Operations Advisory Committee (COAC) released a document from its April 15 meeting, which among other things, discussed ways to improve the process for intellectual property rights (IPR) and forced labor practices.

IPR Monitoring A new platform for IPR was proposed, which would automatically record a trademark with CBP once registered with the patent and trademark office. Brokers would also have access to this data to help vet and automate for importers. COAC also proposed a systematic function that utilizes blockchain, allowing IPR holders to exchange messages with CBP when seizures take place. Also noted was the "proof of concept" that was done on blockchain in late February. When someone is importing with a trademark, the IPR holder will have the ability to "approve" whether that import is valid on an encrypted blockchain only visible to customs and the IPR holder.

Forced Labor The COAC Committee is also suggesting that CBP update its prior disclosure guidelines to include forced labor. One suggestion aims to have CBP create guidelines that importers should follow when there is an issue with forced labor. Currently, importers can disclose forced labor violations, but there aren't enough guidelines for what the statements should say and how they should be presented. COAC also proposed that a new section be added in the 19CFR, along with recommendations on how CF28s can be issued on forced labor inquiries.

For a roundup of tariff-related news, visit Tariff Insider.