Ocean and air freight rates and trends; trucking and customs news for the week of Month Date, Year. 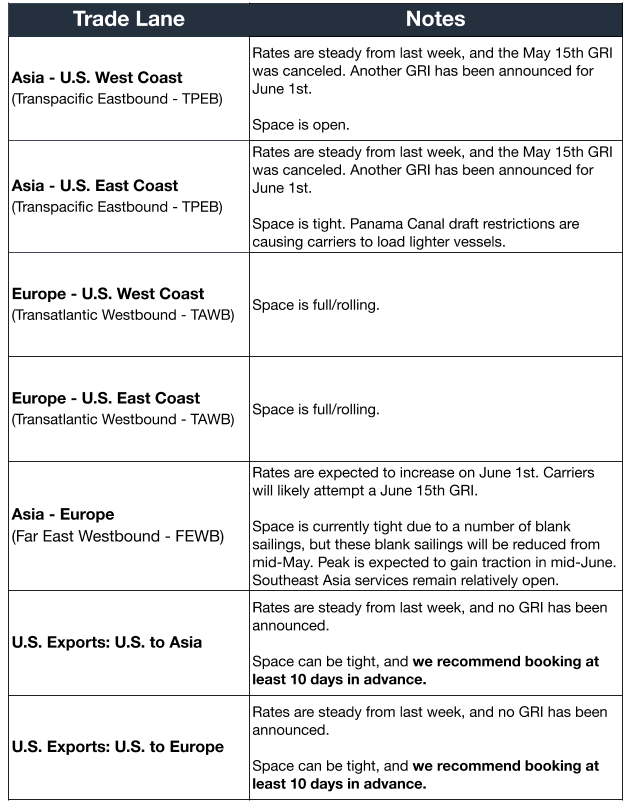 The British Columbia Maritime Employers Association (BCMEA) has formally announced a lockout of longshore employees across all of British Columbia, including ports and terminals in Vancouver, Vancouver Island, Prince Rupert and Stewart. Stay tuned for updates on the situation and how it will affect operations on our blog.

CMA CGM has ordered 50,000 container trackers this year, after investing in the production company, Traxens, back in 2012. The trackers are attached to containers, and can provide data on “the container’s position, both at sea and on land, the intensity of any shocks that may occur, the opening and closing of doors, and external temperature variations.” The purchase announcement comes a year after MSC said it would begin outfitting 50,000 containers with smart technology in the next few years.

More transpacific sailings were canceled this week and rates continue to fall, but carriers are hopeful of an uptick coming soon. Import volumes had soared at the end of 2018 as importers front-loaded shipments in advance of the anticipated January tariff hike, but advance notice wasn't given for the most recently announced tariffs. Carriers say that the stockpiles imported into the U.S. before the tariffs are likely now running low and will force importers to start bringing in more goods despite tariffs. 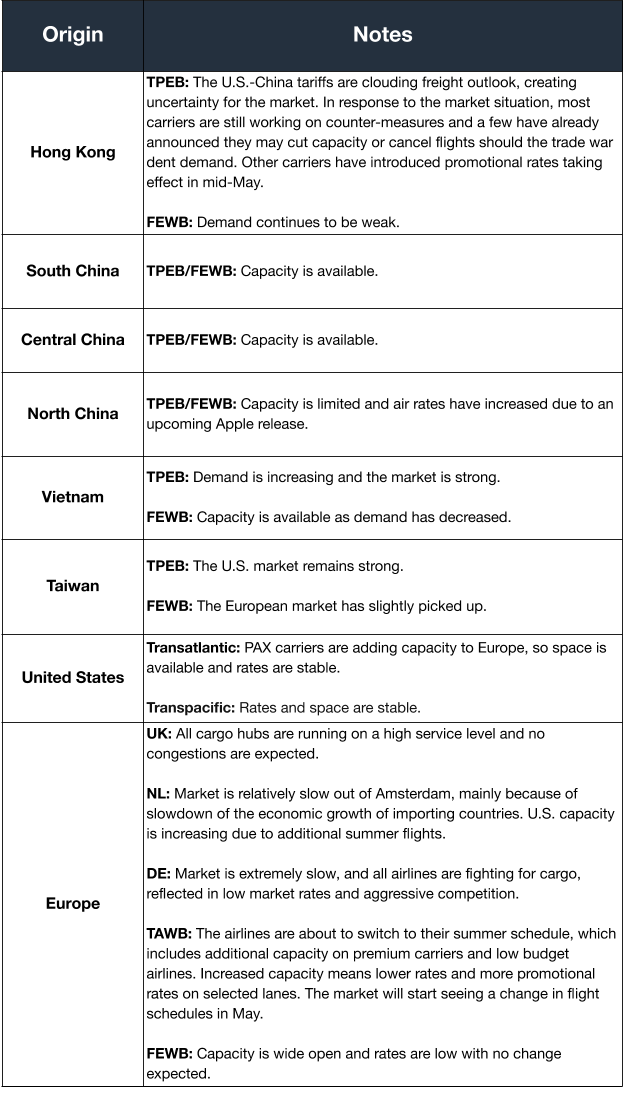 Pilots protested last week outside of Amazon’s annual shareholder meeting in Seattle, claiming that the carriers who fly for Amazon -- ABX, Atlas Air and Southern Air -- were ignoring safety concerns. According to Atlas Air pilot and Airline Professionals Association (APA) spokesperson Robert Kirchner, “Atlas pilots are overworked, underpaid and disrespected [and] our planes are not adequately staffed or maintained.” Amazon has threatened to change carriers if a negotiation can’t be reached.

“Semi-conductors have long been a bellwether for the air cargo industry,” according to The Loadstar, and now that Huawei is banned from purchasing U.S.-made parts, the air freight market is expected to feel the effects of dipping sales. Demand remains low across the market, especially between Asia and Europe.

Two technology companies, Stoneridge and Bosch, are testing out camera systems on trucks that could replace external mirrors. Stoneridge says that its mirrorless system offers a 25% greater field of view compared to conventional mirrors, and that it could help reduce driver fatigue. Other companies are developing similar systems and according to Freightwaves, it “could replace mirrors in the very near future.”

The Federal Motor Carrier Safety Administration (FMCSA) is asking for public comment on training, qualification and safety concerns regarding a pilot program that would allow 18-20 year-olds to drive commercial motor vehicles in interstate commerce. The program would create more jobs in the industry and address the nationwide truck driver shortage. So far 75% of received comments are against the program.  The public comment period is open until July 15, 2019.

The USTR has posted a notice that the exclusion process for the third tranche of tariffs will open “on or around June 30.” The window to file for exclusions will likely open that day for the 10% tariffs imposed on September 21, 2018 and revised to a 25% tariff on May 10, 2019. Many are expected the official notice to have similar parameters to that of the first two tranches.

Footwear retailers and distributors sent a letter to President Trump imploring him to remove the footwear HTS numbers from the possible list 4 of Section 301 tariffs. Over 150 shoe manufacturers and retailers signed the letter. They argued that the increased tariffs would add $7B in additional costs to consumers every year, and that existing tariffs were already high. Raising them further would cause the industry harm because it takes years to move sourcing to another country. The Sports & Fitness Industry Association is also putting together a petition, and other countries are expected to follow suit.

The Commercial Customs Operations Advisory Committee (COAC) has released a document that hopes to push CBP to implement global data standards and protocols with blockchain that’s consistent with World Customs Organization (WCO) principles. They urged that these standards and protocols be designed to encourage the greatest amount of technology adopters, as blockchain remains a priority in modernizing trade.