Ocean and air freight rates and trends; trucking and customs news for the week of March 20, 2019.

A significant amount of empty containers are being returned to terminals after the large pre-Chinese New Year and tariff volumes, and are taking up terminal space, rail cars, and chassis.

To help with on rail congestion, ocean terminals and railroads are dispatching to smaller destinations based on train capacity, not timetables. For example, a terminal may be waiting for the train to reach 80-90% capacity rather than departing because it is "Wednesday."

Rail ETA reliability is currently inconsistent at best. Unfortunately there is very little Flexport can do to expedite rail once the container has been handed off to the railroad. Flexport is not a party to the rail bill, and most major railroads service international (i.e. inbond) movements on a first-come, first serve basis. Rail terminals are also not configured to pull a container forward. 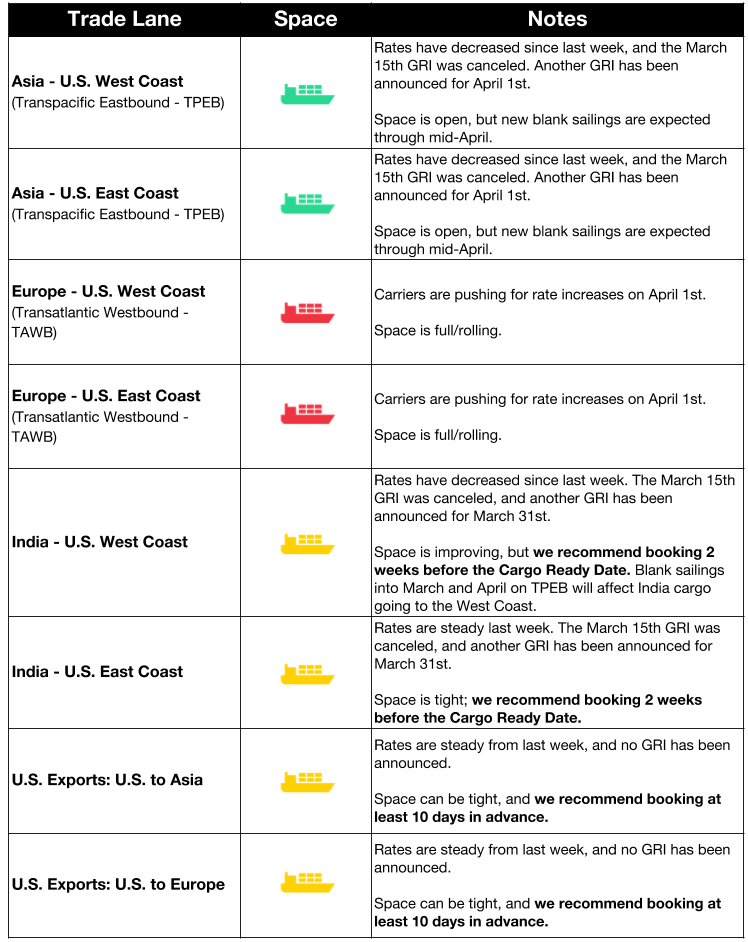 Quay side operations have improved, but a shortage of haulage capacity restricts movement. Haulage capacity in Germany remains a challenge, reducing intake of barges and increasing moves via rail and truck.

Whether they install scrubbers, build new vessels, or use higher-quality fuel, carriers will need to make significant changes to comply with the new regulations, and those changes will come at a cost to shippers. Freight rates may climb between now and 2020 as a result. Analysts are also predicting that the new regulations will cause more transhipments, resulting in further delays. 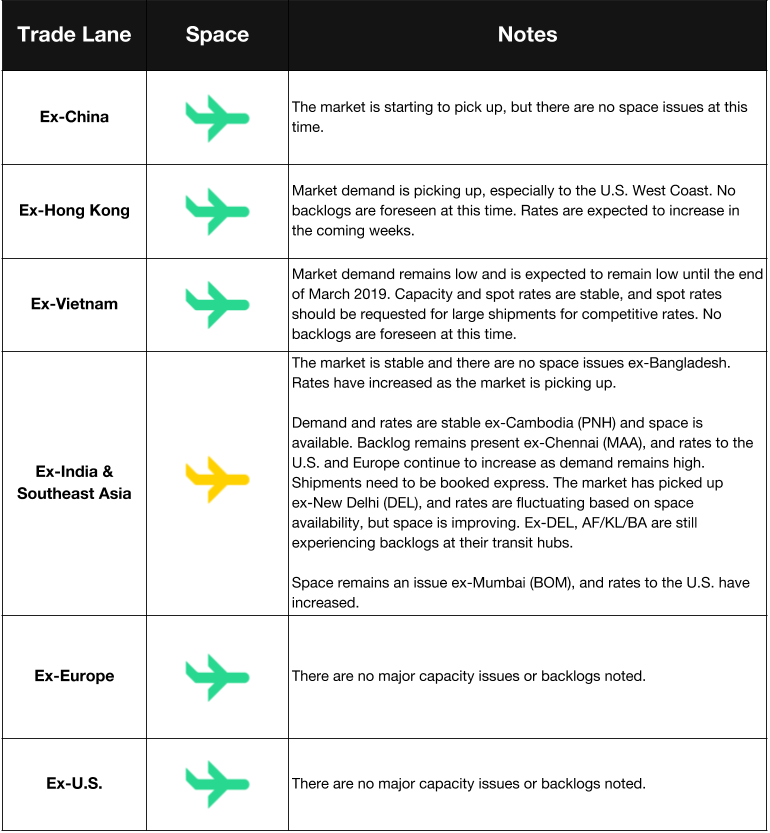 No Flights into Pakistan

Pakistan had closed its air space following tensions with India, causing Emirate and Qatar Airways to suspend flights beginning on February 27. Air space is now open into Pakistan; but no flights are operating into Pakistan over India as air traffic communication between the two countries is currently halted.

The Environmental Protection Agency (EPA) handed out $530,199 in fines for non-compliant foreign-made vehicle engines coming into the ports of Long Angeles and Long Beach. These engines lacked emissions controls for motorcycle, construction, and ATV engines and parts, failing to adhere to the Clean Air Act. 24 companies were involved with the violations of excess carbon monoxide, hydrocarbons, and nitrogen oxides, which can cause respiratory illnesses, aggravate asthma, and lead to the formation of ground-level ozone. Some companies were also required to export their non-compliant engines.

The International Trade Commission (ITC) has proposed amendments to its rules on the submissions and considerations for the Miscellaneous Tariff Bill (MTB) process that they aim to implement for the next October 15, 2019 petition period. They will require product value and dutiable value for the next five years, an estimate of total imports of the petitioner’s articles they are applying for, the names of domestic producers, and a certification that the information provided is true and correct.

A new Department of Homeland Security task force has been assembled in Detroit as a multi-agency effort to crack down on Intellectual Property Theft (IPR). The task force was designed to collaborate between multiple agencies (DEA, BIS, FDA) to pool resources and weed out counterfeit and health risk products. Going forward, it will likely be implemented with other ports.