Ocean and air freight rates and trends; trucking and customs news for the week of March 6, 2019.

Congestion at the ports of Los Angeles/Long Beach has eased up some after Chinese New Year, but delays are still longer than usual. New York and New Jersey ports are still heavily congested. 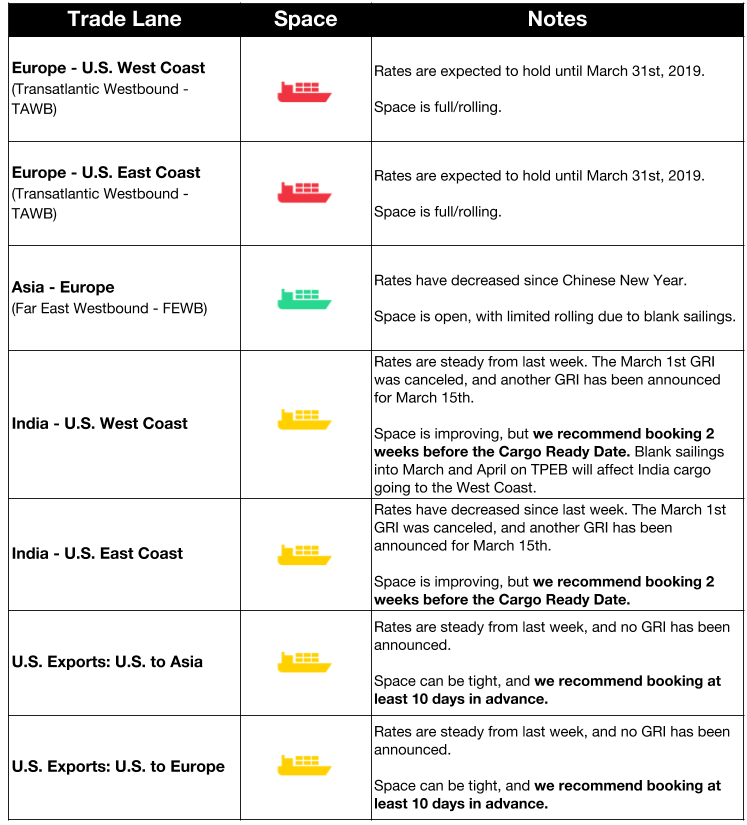 The Florida port has been added to CMA CGM’s Pacific Express 3 rotation. The addition makes Tampa the fourth stop on the Gulf Coast, before the string continues on to Miami and Jaxport. The port addition allows Central Florida shippers to avoid high long-haul trucking costs.

More empty containers are being exported back to Asia than ever before, bringing empty containers up to a record 25.6% of all movements. The trade war has been cited as the cause for the increase in deadheading, as shippers imported goods into the U.S. ahead of the tariff hike, but U.S. exports “remained stagnant.”

The Federal Maritime Commission (FMC) concluded their year-long investigation into detention and demurrage and found them to be “just and reasonable.” The final report, expected in September, will provide standardization recommendations. 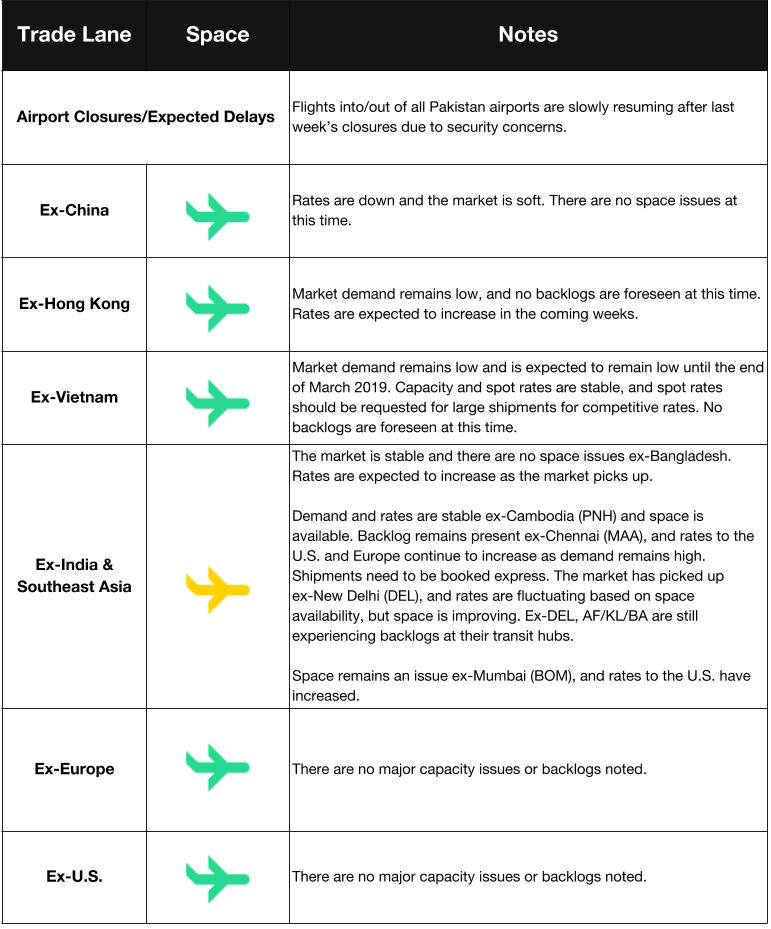 Boeing is placing spare airplane parts around the UK and the world in preparation for a no-deal Brexit. Ken Shaw, head of supply chain management, said that in light of the UK’s uncertain trade future, “we are having to be more purposeful so we are redistributing inventory.”

A new report says that Dover’s operations would be able to continue as normal even if dwell times and Calais port times increased by 50%. Dover’s port capacity is able to handle the additional 50%, although the port would need to maintain their current vehicle check-in efficiency.

In a March 4th press release, U.S. Trade Representative Robert Lighthizer announced that India and Turkey will be removed as beneficiary countries in the Generalized System of Preferences (GSP) trade program. The release stated that India failed a compliance check, and implemented a wide array of trade barriers that negatively affected U.S. commerce. Turkey was removed because the country had economically developed to the point where it should no longer benefit from preferential market access. These changes will take effect 60 days after Congress and the governments of India and Turkey are officially notified.

The office of the U.S. Trade Representative (USTR) released a document that shows that 985 exclusions have been granted, out of more than 10,000 requests, from the first tranche of section 301 goods. The granted exclusions are retroactive to the July 26, 2018 implementation date, and apply to all importers that brought in goods under those tariffs. 21 tariffs were granted exclusions.

The USTR has released a 373-page document and put out a press release that outlines their 2019 agenda. The Trump Administration release covers a wide array of topics, with focus on modernizing policies to help aid U.S. growth. The release determined that many of the free trade programs currently in place put the U.S. at a disadvantage, and put emphasis on trade agreements and the ratification of the USMCA. China and the issues that led to the current trade war were also heavily addressed.