Ocean, trucking, and air freight rates and trends for the week of November 7, 2018. 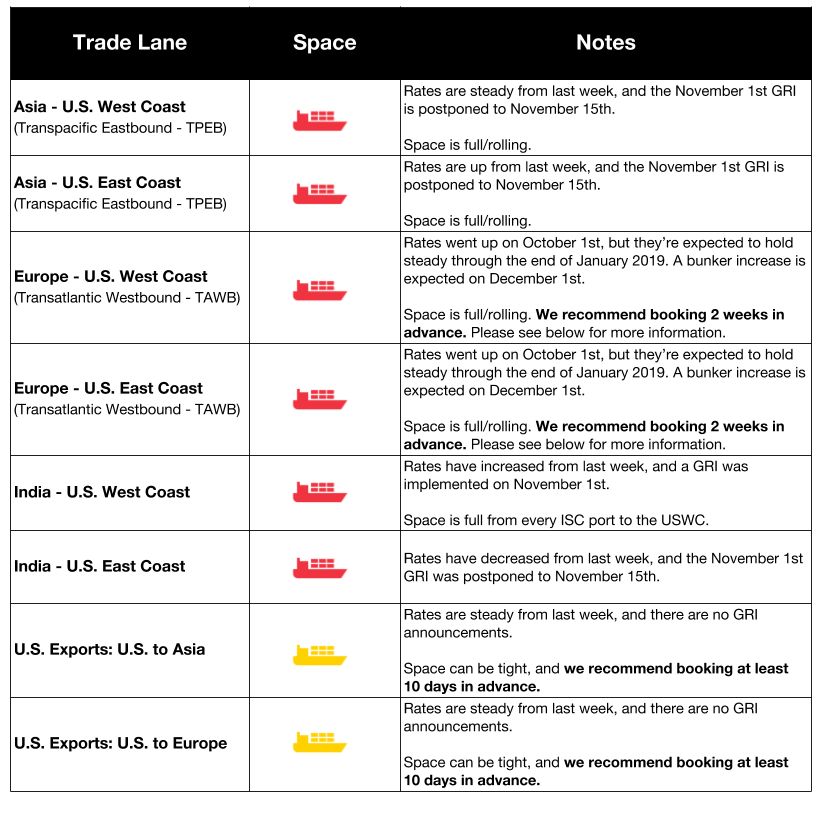 UK ports are very congested, which is causing a decline in port productivity and tight trucking capacity. Trucking currently needs to be booked 15 days in advance.

On Monday, the West Coast Marine Terminal Operators Agreement (WCMTOA) announced that it would implement the PierPass 2.0 extended gates program in Los Angeles-Long Beach on November 19th. This will pass if the Federal Maritime Commission (FMC) doesn’t block the revised extended-gates program.

Excess Vessel Supply May Cause Blank Sailings (All Lanes)

Slow growth, additional container tonnage, and low vessel scrapping have created market overcapacity, so carriers may continue implementing blank sailings to avoid dropping rates. Note that the transpacific eastbound lane is maintaining some healthy growth in the rush to import in advance of 2019 tariffs.

Blank Sailings Ahead for Asia-Europe Lane

Carriers have not been able to raise freight rates on this lane despite already implementing several blank sailings. More blank sailings are anticipated as a result of these low rates and higher bunker costs than in previous years. 2M Alliance’s AE2/Swan Asia-North Europe loop will be reintroduced in December.

Maersk contributes to the modernization of trade with the launch of their instant booking confirmation. The new system will provide visibility into sailings and available space, and reduce waiting times for the party booking the shipment.

Shipments moving via the Rhine have been largely discontinued due to the lowered water levels following a drought. Hapag-Lloyd has implemented low-water surcharges in an attempt to pass on the resulting costs.

The Port Group China Merchants has proposed to create the Qianhai Multi-Country Consolidation Platform (MCC Qianhai) to provide deconsolidation and transhipment services for imports. MCC Qianhai would compete with Singapore and Hong Kong’s free ports in an effort to keep up with China’s rising import volume.

Despite recent controversy surrounding the implementation of Emergency Bunker Surcharges (EBS), CMA CGM Group will raise their EBS to $100 per TEU beginning on December 1st. Other carriers are also preparing to implement a surcharge to compensate for the new low-sulfur fuel regulations in 2020.

Similar to how U.S. import volume is up in anticipation of 2019 tariffs, U.K. warehouses are seeing a surge in demand in anticipation of continuing Brexit negotiations. With the short-term and long-term effects to trade practices still unknown, buyers are importing goods and storing them in the U.K. to avoid potential delays later. 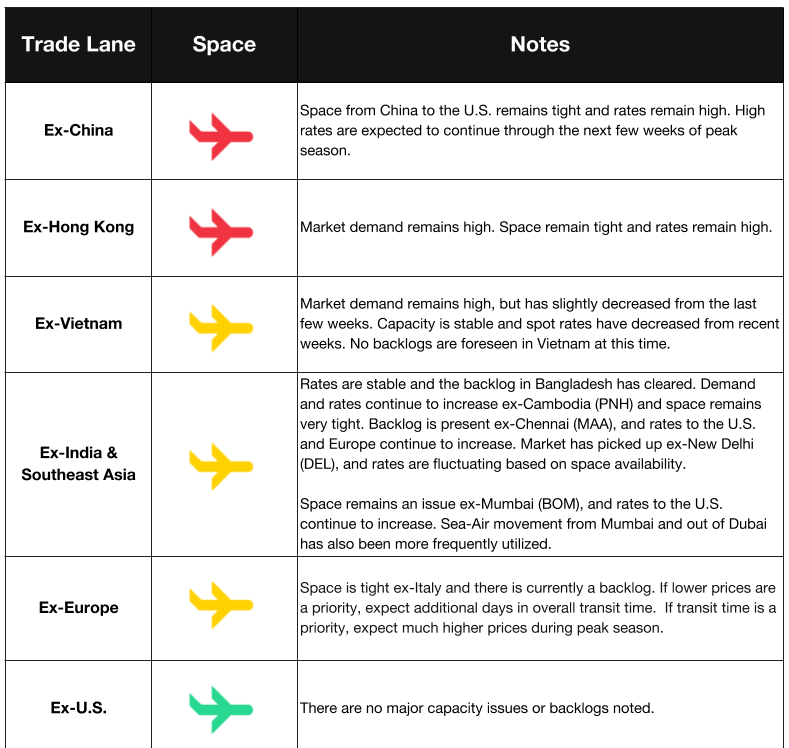 Global prices have risen 8.5% since September 2017, and airlines are continuing to generate revenue despite increasing fuel costs. The China to U.S. trade lane experienced some decline in growth this past September, which may be an initial effect of the trade war.

Ecommerce May Have Been Anomaly in Air Volume Commentary

FreightWaves reports that air freight growth may not have been as slow as previously reported. The ecommerce boom of 2016 may have skewed historical results, and moving forward we can expect manufacturing, not ecommerce, to boost growth.

E-air Waybills to Become Standard in 2019

The Road Haulage Association (RHA) warns that ignoring the current trucking problems will lead to disaster for the market in the future. A shortage of truck drivers, high costs to train new and younger drivers, and constricting regulatory practices are stifling the U.K. trucking market and will lead to a “catastrophic cocktail of disaster” if not addressed.

The 60-mile half-loop connects Hernando, Mississippi to Millington, Tennessee and allows truckers to bypass Memphis congestion. The Interstate, part of the larger Interstate 69 corridor project connecting Canada and Mexico, is projected to lower eastbound transit times and bring economic development to the communities along I-269.

FedEx will raise freight rates and increase accessorial fees in 2019. These prices increases are consistent with year-to-year increases, and will not apply to shipments moving under contract with FedEx. FedEx cited higher transportation costs and tight capacity as the cause of higher rates.