Ocean, trucking, and air freight rates and trends for the week of July 25, 2018. 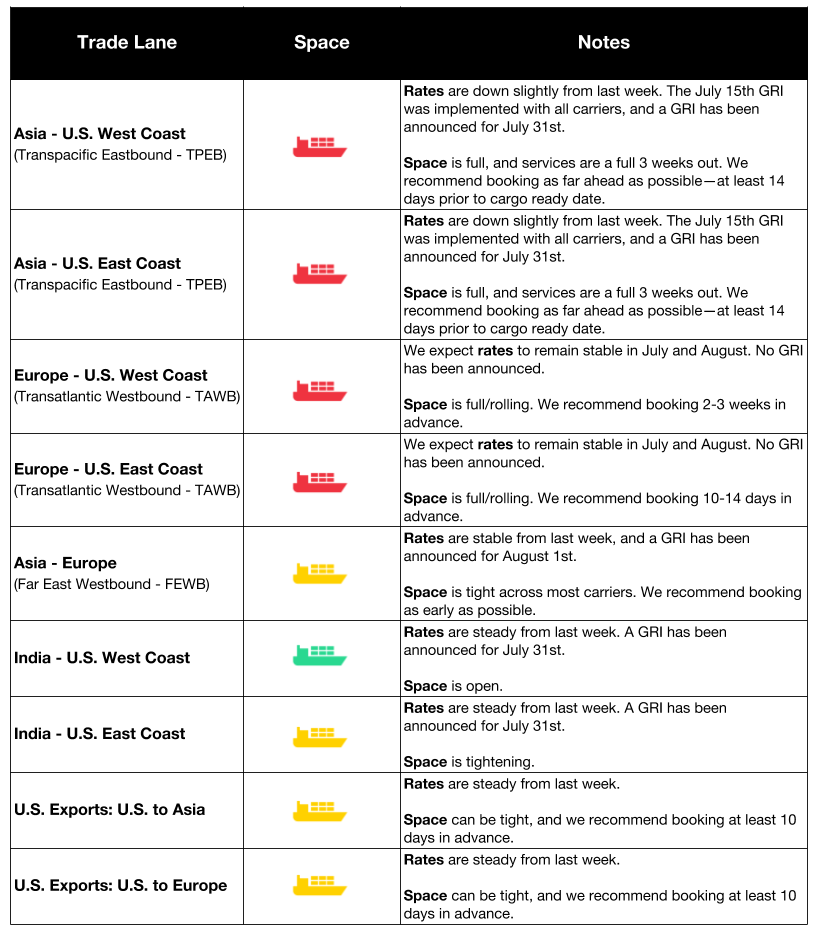 Services on the TPEB lane are three weeks out, and we recommend booking at least 14 days in advance of the cargo ready date. The EBS is expected to go up for some carriers on August 1st.

Carriers are continuing to announce blank sailings and canceling services, which will likely lead to a tightening of the market and an earlier onset of peak season.

On Tuesday, Cosco’s U.S. operations were the target of a cyber attack, which affected its ability to communicate with its vessels, customers, and marine terminals. This follows the cyber attack that targeted Maersk in June 2017 and cost the company as much as $300 million in revenue.

The attack on Cosco only slowed operations, as the carrier had “work-arounds” in place via phone and hard-copy transmissions. Cosco said it’s unsure of when operations will be fully restored.

Anxiety over trade tensions contributed to an 8.4% increase in container imports at the ports of Los Angeles and Long Beach in June, reports The Wall Street Journal. The ports are the largest U.S. gateway for seaborne trade.

This increase in volume is early, as the seasonal shipping surge typically runs from July to September.

Warehouse supply in the U.S. has fallen for a record 32 quarters in a row. The lowest since the dot-com boom, the diminishing warehouse availability is attributed to the rapid increase in online shopping.

The rising price of oil, which is set by the Brent Crude Oil price, has led many carriers to raise their prices. OPEC oil cuts are expected to continue through the end of 2018, with U.S. sanctions against Iran also expected to contribute to rising oil prices.

A number of carriers have announced an Emergency Bunker Surcharge (EBS), which will begin on July 1st.

Related blog post: What you need to know about the Emergency Bunker Surcharges 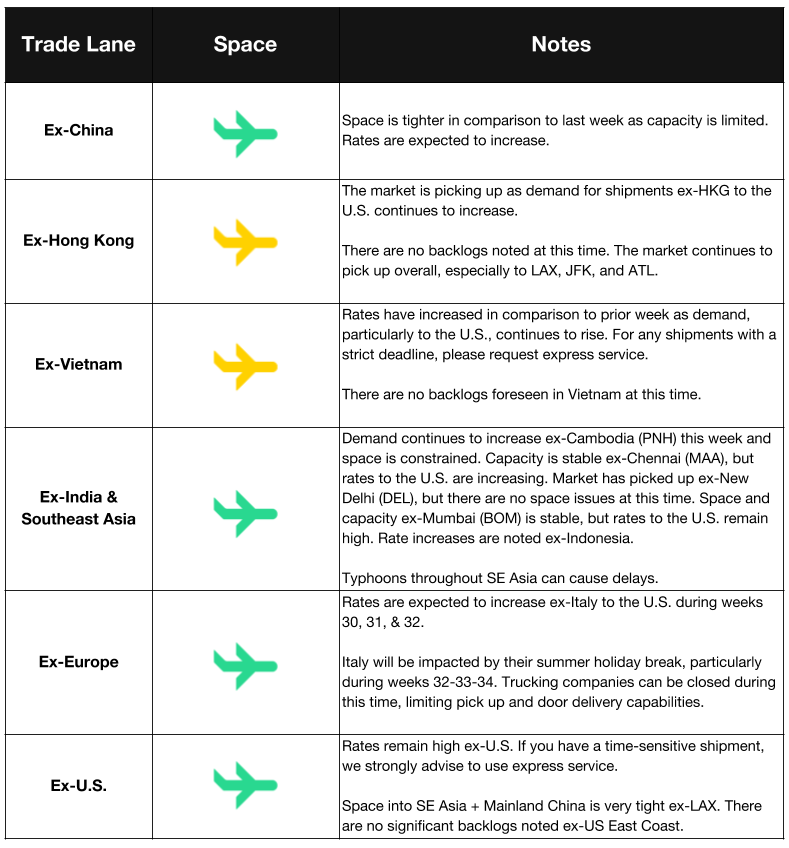 Trucking Analysts Expect Strong Earnings Reports in the Weeks Ahead

As capacity remains tight, truckers are able to set higher prices for shippers. Pair this with the high transportation demand and trucking companies’ investment in more efficient processes and systems, and it becomes clear why analysts expect strong earnings reports from the trucking industry.

According to The Wall Street Journal, “June marked the 16th straight month in which prices increased on an annual basis on trucking’s spot market, where shippers book last-minute transportation.”

Trucking Strike in India May Affect Your Shipments

Private trucking companies in India are refusing trucking orders between states, and the situation is worsening as another major state, Maharashtra, is joining the strike. All operations are shut down in the state as of July 25th.

Orders that don’t cross state boundaries are still being fulfilled, and cargo is still moving from CFS to port. There has been no update on when the strike will end.