Ocean and air freight rates and trends for the week of February 28, 2018. 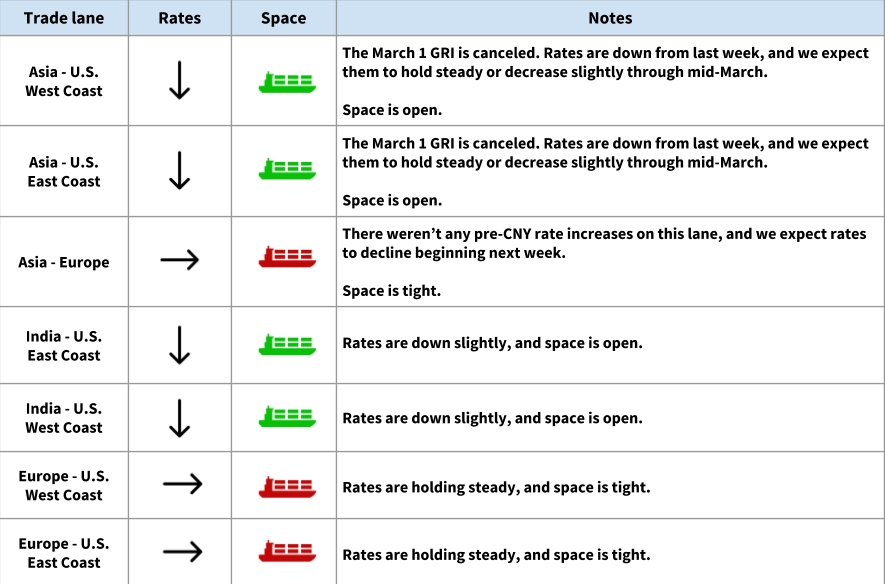 Carriers have canceled the March 1 GRI, and rates are down from Asia and India to the U.S. The March 15 GRI has been postponed to March 18.

We expect rates to hold steady or continue declining slightly through the middle of the month.

Asia - Europe rates are holding steady, continuing the stable pattern we’ve seen since the beginning of 2018. We anticipate that rates will decline from mid-March. 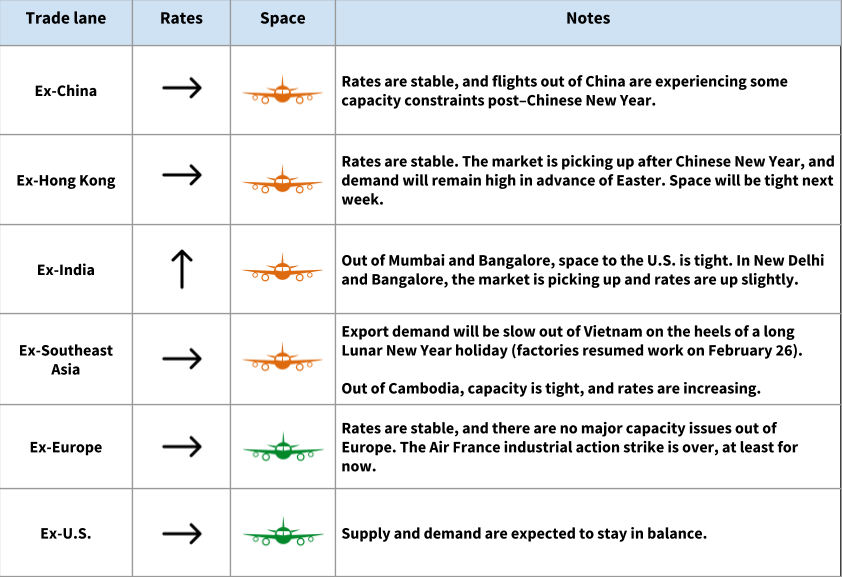 Air freight traffic will continue growing, albeit at a slower pace than 2017

IATA reports that global air freight traffic grew 9% year-over-year in 2017 (which will be no surprise to anyone who shipped last year, and experienced the high rates and capacity crunch of the supply/demand imbalance).

The Loadstar notes that many airports and air cargo facilities are ill-equipped to handle this growth. “The surge in traffic during the peak season overwhelmed airports, including some of the large gateways, exposing inadequate cargo capacity. As demand is forecast to remain strong, the pressure will only increase in the near future.”

Trucking still very constrained in the US and Canada

Import volume is up and ports are congested -- and, at the same time, capacity has been removed from the market due to the ELD mandate (which is also contributing to longer transit times). On top of that, there’s a significant driver shortage, and trucking companies are struggling with retention. New capacity is being added, but not quickly enough.

Winter weather throws another wrench into the situation. Snow halted most truckers in Minneapolis late last week, and flooding in Dallas caused road closures and delays.

Drayage in the Midwest is especially tight

Congestion at Midwestern rail ports has led to solidly booked drayage providers and chassis shortages. In particular, tri-axles for heavy loads are in short supply.

Extreme or prolonged cold causes big problems for trains, which rail lines attempt to mitigate by running shorter trains. Unfortunately, this results in backlogs and delays in many cold-weather areas during the winter months, and right now it’s hitting Canada pretty hard. If you’re routing through Vancouver or Toronto, in particular, you’re likely to experience delays.

This week’s JOC notes major intermodal and trucking delays in Chicago, so severe that “some motor carriers will not accept new customers until April.”