Ocean and air freight rates and trends for the week of February 7, 2018. 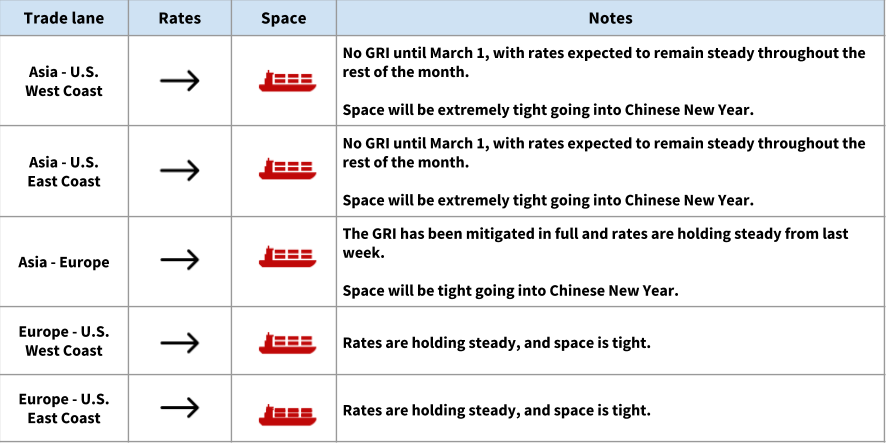 No GRI until March 1

Carriers have canceled the February 14 GRI, with the next GRI expected to come on March 1. In spite of the upcoming Chinese New Year starting Friday, February 16 (see below), rates should remain steady throughout the rest of the month.

As we head into Chinese New Year next week, space will become extremely difficult to secure. Since most factories will be closed throughout the holiday, we will see an increase in blank sailings after Chinese New Year resulting from the lower demand for space.

Air freight rates remain stable, with the possibility of slight increases in rates on the Asia - North America trade lane as we head into Chinese New Year. The JOC observes that Asia - Europe rates are notably stable for this time of year, possibly as a result of Chinese New Year falling later than usual along with overall increased capacity on the lane.

Demand for cargo coming out of China is increasing, and we’re starting to see space constraints to both the EU and the US. We can expect similar space constraints out of Hong Kong and Vietnam leading up to Chinese New Year.

Severe delays at ports across the country

Ports are seeing significant delays as the combination of weather and the continued effects of the ELD mandate continue to constrain trucking capacity around the country. New York, Savannah, Columbus, Chicago, Detroit, Memphis, and Houston are particularly affected, with chances of demurrage, storage, and dry runs increasing as a result.

Severe weather continues to bring down overall productivity and capacity for truckers in Chicago, with 9+ inches of snow forecasted for later this week. Chassis shortages are expected to continue as well. If your cargo is routing through Chicago, you may experience delays or chassis split fees.