Ocean and air freight rates and trends for the week of January 31, 2018. 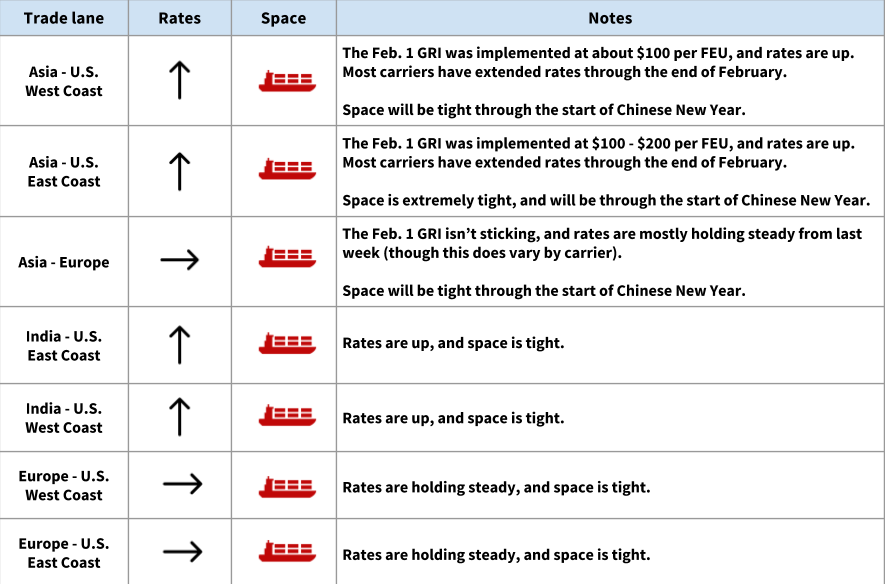 The February 1 GRI was heavily mitigated

Carriers implemented the Feb. 1 GRI at a fairly low rate, especially considering the pre–Chinese New Year crunch: about $100 from Asia to the USWC, and from $100-$200 to the USEC (where space is especially tight). Most carriers have extended rates through the end of February, so rates should remain steady for the rest of the month.

Space will be tight through Chinese New Year

Space is very difficult to secure in the final weeks before Chinese New Year, and we’ll see blank sailings after CNY. Space should open up after that.

This will be an interesting year for Asia - Europe, which is adding quite a bit of capacity -- most recently, two mega-ships for CMA CGM and OOCL.

For the most part, air freight rates remain stable with just a few weeks to go before Chinese New Year begins on February 16.

The JOC notes that “air freight rates out of China are not yet showing any significant spikes,” and that the late start of the holiday may serve to “extend the traditional peak shipping period and possibly [smooth] out the spike ahead of the factory closures.”

Demand will rise in advance of CNY

We’re beginning to see increases in demand for cargo ex-China, with capacity equally constrained to both the EU and the US. We also expect space constraints out of Hong Kong and Vietnam.

The Port of New York and New Jersey has a significant backlog of containers waiting to load onto the rail, with delays expected to last for at least another week or two. The railcar shortage is due to recent weather conditions in the Midwest, which slowed the return of empty railcars to port.

Trucking capacity was already difficult to begin with, but the situation is exacerbated by the rail backlog -- more shippers are trying to avoid the rail by moving their cargo by truck.

Nationwide, trucking rates are up, and capacity is constrained

We recently wrote a detailed account of the drayage situation at major U.S. ports -- check it out here.

Congestion is severe in Charleston, Jacksonville, Norfolk, Savannah, Chicago, Columbus, Detroit, Memphis, and Houston, with drivers reporting long wait times (in the case of Norfolk, these are stretching as long as 3-5 hours).

We’re seeing chassis shortages at the ports of Dallas, Newark, New York, and Oakland. If your cargo is routing through any of these ports, you may experience delays or chassis split fees.