Ocean and air freight rates and trends for the week of December 20, 2017.

Capacity is tight. In Asia, carriers have begun taking freighters offline for end-of-year maintenance checks, which is further constraining space to both the U.S. and the EU.

Out of the EU, space is still extremely tight. Peak season hasn’t slowed down, and shippers are rushing to empty their warehouses before the holidays.

Another fuel surcharge increase out of Hong Kong 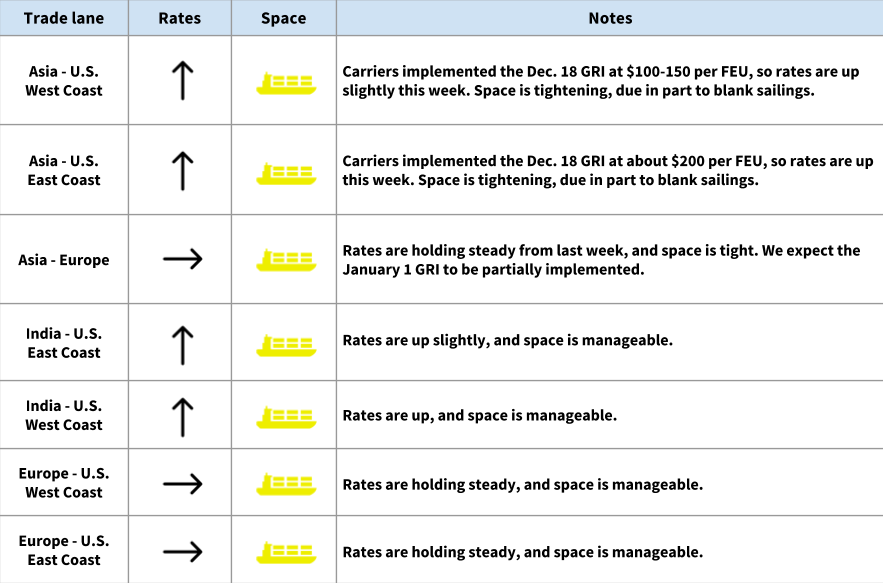 Rates are up from Asia to the USWC and USEC this week, after carriers implemented a GRI. We expect rates to hold steady as space continues to tighten due to blank sailings.

Rates will increase significantly in January due to pre–Chinese New Year demand.

Chinese New Year falls a bit late this year, beginning on February 16. Factories in China will be closed and/or operating at diminished capacity for at least 4 weeks around that time.

In anticipation of Chinese New Year, ocean and air freight rates will rise significantly, and space will become more difficult to secure. Read this article for tips on how to prepare, or ask your Flexport team!

U.S. Customs has announced that the MPF will increase slightly, beginning January 1, 2018. The new minimum and maximum are:

The percentage used to calculate the MPF will remain the same, at 0.3464%.

Trucking capacity is stretched very thin in Chicago, Savannah, Seattle, Houston, and Charleston. If you have cargo routing through any of those cities, you may experience delays.

The ELD mandate has taken effect

As of December 18, U.S. truckers are required to use electronic tracking devices to record their driving hours, which will mean strict enforcement of federal hours-of-service rules.

Some states have announced that they will delay enforcement.

There’s a combination of factors at play, especially: fuel cost increases, higher demand for trucking to Texas and Florida due to hurricane relief, wildfires, and the general holiday surge.