Ocean and air freight rates and trends for the week of December 13, 2017. 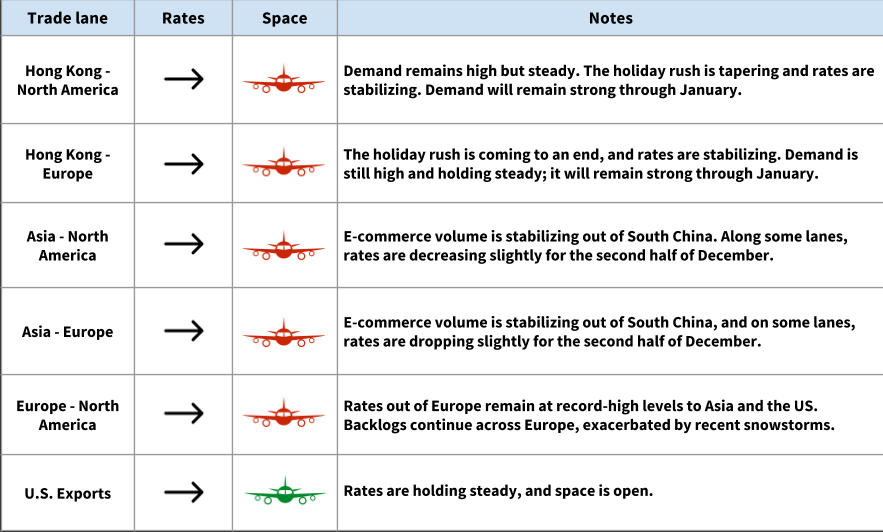 Demand is still high out of Hong Kong, but it’s no longer increasing. The big holiday push is coming to an end, and rates are stabilizing.

Out of South China, e-commerce volume is leveling off. In some cases, rates are decreasing very slightly for the second half of December.

Capacity is still very constrained in Vietnam, where airlines remain booked up to 1 week in advance.

Record-high rates out of Europe

Rates are still at record-high levels out of Europe, exacerbated by a continued supply/demand imbalance and, now, winter weather conditions. As one European forwarder told the Loadstar, “If it’s not the high demand or undercapacity due to crappy cargo aircraft, then the weather will eventually get you.”

Demand will stay strong in 2018

Snow in Amsterdam, Paris, and Amsterdam has caused hundreds of flight cancellations, exacerbating the already-significant backlogs at many European airports.

The situation is particularly severe at FRA, where airline warehouses are still full, and massive backlogs continue. Carriers have been using the Frankfurt-Hahn Airport as a backup, but higher volumes have brought backlogs there as well.

Truckers are reporting long wait times at JFK, LAX, ATL, and ORD with delays of hours or even days (which can quickly result in storage fees). If you have cargo routing through any of these airports, expect delays and possibly extra fees.

Severe congestion will continue at all four airports through the holidays. 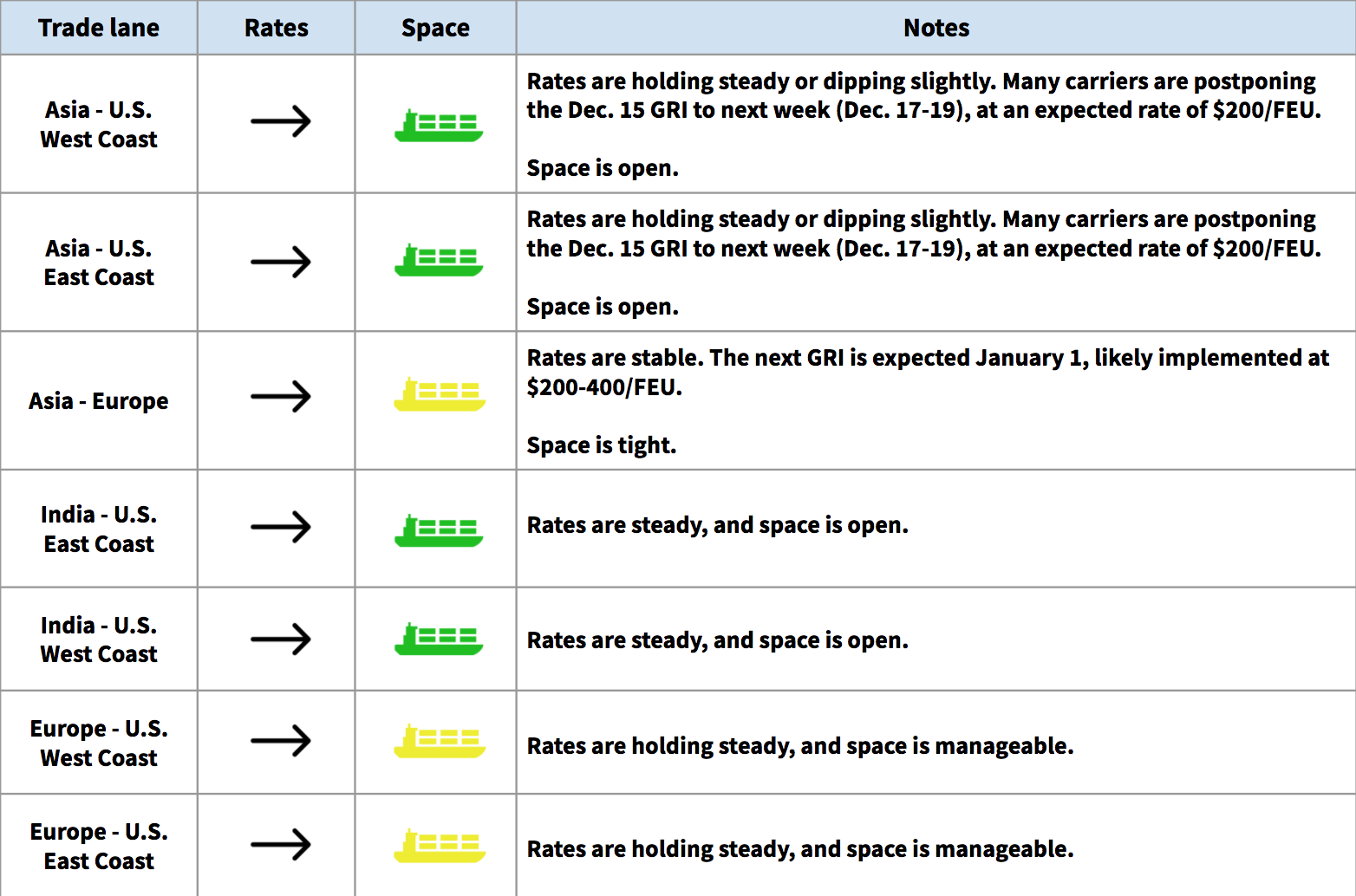 Many carriers are postponing the Dec. 15 GRI

The December 1 GRI eroded rapidly, and many carriers are postponing the Dec. 15 GRI by a few days (December 17) in an attempt to increase the chances that this one will hold.

We expect this GRI to be implemented at about $200/FEU, but rates will begin to slide back down very quickly.

As is typical for this time of year, carriers are planning blank sailings on many lanes. This will mean an 8% in capacity from Asia <> USEC during the last week of December, and a 2% reduction for Asia <> USWC.

Holiday congestion at Vancouver and Los Angeles is resulting in long dwell times for rail. If you have cargo being loaded at either port, you should expect delays.

Chinese New Year falls a bit late this year, beginning on February 16. Factories in China will be closed and/or operating at diminished capacity for at least 4 weeks around that time.

In anticipation of Chinese New Year, ocean and air freight rates will rise significantly, and space will become more difficult to secure. Read this article for tips on how to prepare, or ask your Flexport team!

’Tis the season of weather-related delays

Forecasters are predicting a cool, wet winter in the North, and warmer, drier weather in the South. Winter weather can mean all sorts of delays for trucks, so try to plan ahead, if possible, in the coming months.

At this point, there’s a lot of uncertainty about the impact of the ELD mandate. Beginning on December 18, U.S. truckers will be required to use electronic tracking devices to record their driving hours, which will mean strict enforcement of federal hours-of-service rules.

We also expect less patience with long wait times, because each eligible driving hour will be more valuable than ever.

The drayage impact will be different, but we’ll see it with congested ports: If a trucker has to wait a long time to get into the terminal, that means they might turn their truck 3 times in a day instead of 4. Their overall pricing will be higher to compensate for fewer pickups.

We’re already hearing from some carriers that they will plan to charge substantial layover fees if a trucker is delayed while trying to pick up, and is thus unable to complete the trip back to the yard within the mandated 14-hour continuous driving period.

Rates are especially high in California

There’s a combination of factors at play, especially: fuel cost increases, higher demand for trucking to Texas and Florida due to hurricane relief, wildfires, and the general holiday surge. The market will likely only become tougher once the ELD mandate takes effect.