Ocean and air freight rates and trends for the week of November 29, 2017. 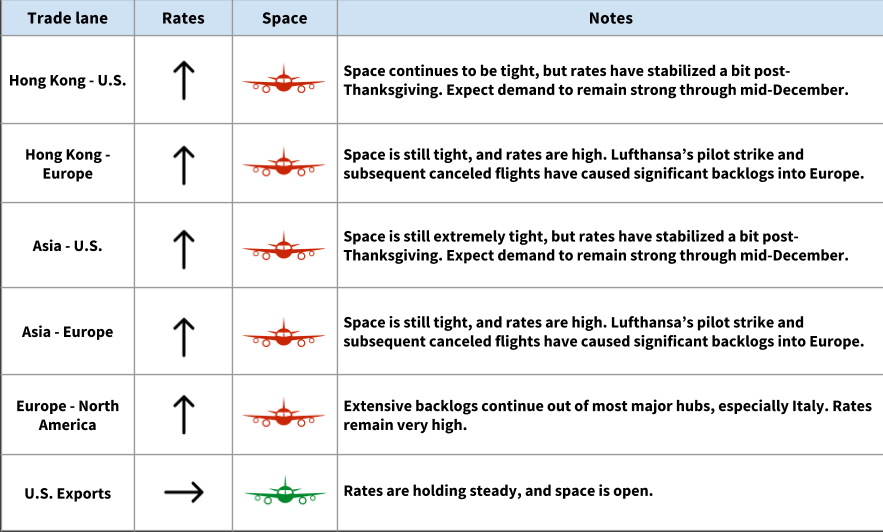 Air demand is still “crazy,” with rates to match

Demand for air freight has stayed very high, with one forwarder telling the Loadstar that demand has “gone crazy.” Backlogs are the new normal, particularly from Europe to North America (in some cases, the delays are several weeks long). “I’ve never seen anything like it,” said the forwarder.

“The issue with capacity seems to be affecting everywhere, with all major trade lanes backlogged – even those that shouldn’t be,” another forwarder told the Loadstar.

E-commerce and general economic growth have continued to drive demand, and we expect this to last through mid-December (prior to Christmas).

Air freight rates continue to rise, although they have stabilized a bit post-Thanksgiving.

The situation at FRA (Frankfurt Airport) has not improved -- waiting times are still very long due to personnel and traffic control issues. If your cargo is moving through FRA, you should expect significant delays and trucking wait fees.

This is likely to continue through the rest of 2017.

The French airline pilot union (SNPL) has voted to strike during the Christmas holiday. They have not specified dates for the strike, and it’s still possible that negotiations will succeed and the strike will be called off. If the strike does go forward, it will affect the schedules of all French airlines.

Truckers are reporting long wait times at JFK, with delays of hours or even days (which can quickly result in storage fees). If you have cargo routing through JFK, expect delays and possibly extra fees. 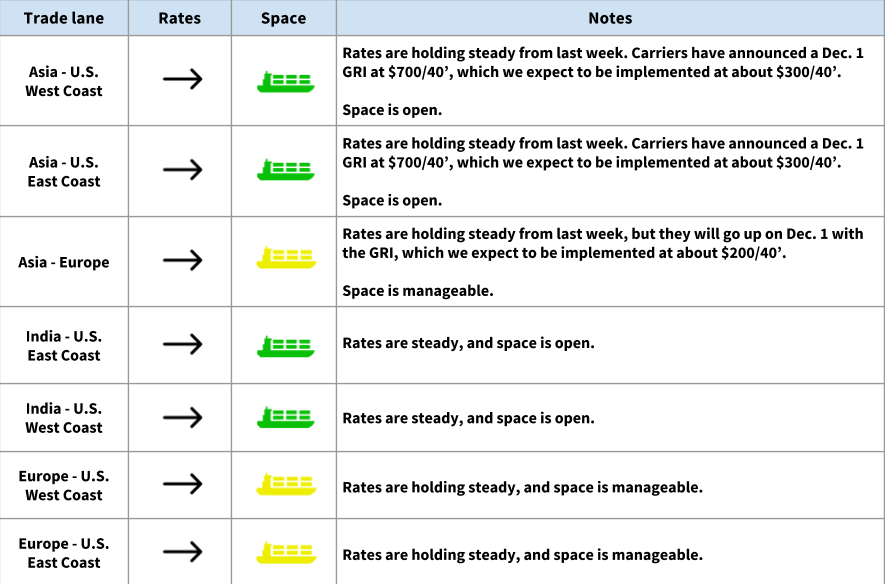 Rates will go up with Dec. 1 GRI

Carriers have announced a December 1 GRI, which we expect to be partially implemented. For Asia - U.S. lanes, we anticipate $300/FEU; for Asia - Europe, it’ll be more like $200/FEU.

There’s a combination of factors at play, especially: fuel cost increases, higher demand for trucking to Texas and Florida due to hurricane relief, and the general holiday surge. The market will likely only become tougher once the ELD mandate takes effect.

Rates are high overall through Christmas