Ocean and air freight rates and trends; customs and trade industry news plus Covid-19 impacts for the week of November 1, 2022. 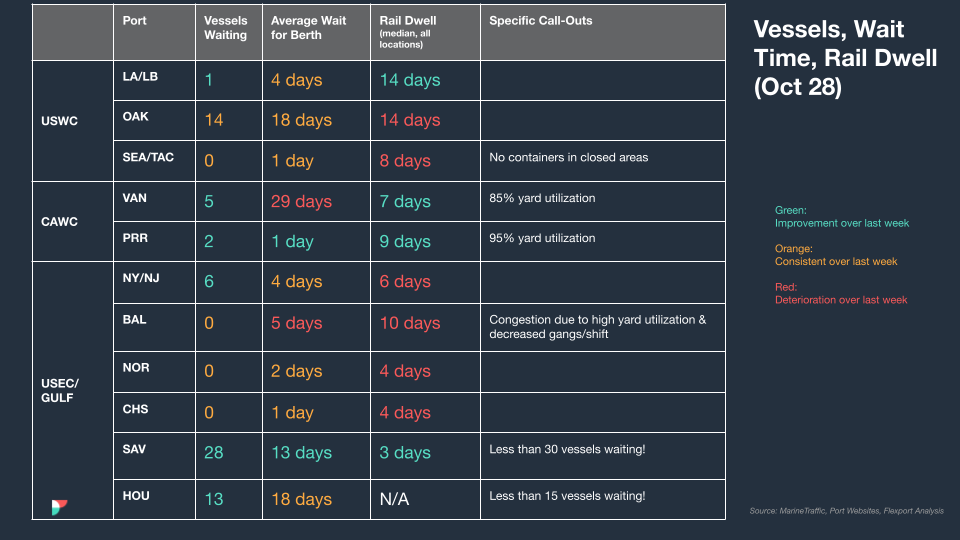 Our first branded Flexport truck in operation in the Netherlands (running on HVO).

In an October 27 CSMS message, CBP announced updates to the October ACE Development and Deployment Schedule. Changes included a delayed launch date for the new UFLPA Region Alert, initially slated for this month, to December 15, 2022. Deployment of the Region Alert will make the postal code a mandatory data element for all customs entries with a country of origin of China and for MID creation or updates. Following concerns from the trade, CBP released another update of the ACE Development and Deployment Schedule on November 1. The target date for the UFLPA Region Alert deployment is now listed as “TBD.”

Trusted Trader Programs to be Recognized Between EU and Canada

On October 28, Canada announced the signing of a Mutual Recognition Agreement with the European Union (EU) to recognize each other's trusted trader programs. Members of Canada’s Partners in Protection (PIP) and the EU’s Authorized Economic Operator program (AEO) will enjoy the benefits of having their goods treated as low risk and cleared by Customs authorities faster at both EU and Canadian borders.

As Beijing’s zero-Covid policy causes more supply chain disruption, the country’s manufacturing sector has shrunk for the third month in a row. According to The Loadstar, this is exacerbated by the softening in overseas demand and has resulted in a decline in both output and new orders.

US Diesel Prices Soar and Not Expected to Slow Down

According to CNBC, diesel prices have increased by 33% for November deliveries, and are expected to continue increasing. This is prompted by the declining diesel reserves, which are the lowest since 1951, a drought on the Mississippi River prompting more rail and trucking, and a potential rail trike leading to a surge in prices.

Using Flexport’s proprietary supply chain data combined with the U.S. Bureau of Economic Analysis’s Personal Consumption Expenditure, the Flexport Research team has introduced an industry-first forecast of what U.S. consumption could look like in the coming three months. The Flexport Consumption Forecast provides insights as the unusual economic effects of the pandemic linger on and reliable past consumption patterns are set aside by shoppers.

While the latest US GDP numbers seemed to show an economy perking up after two negative quarters, the key underlying trends are those of an economy slowing down.