Ocean and air freight rates and trends; customs and trade industry news plus Covid-19 impacts for the week of April 26, 2022. 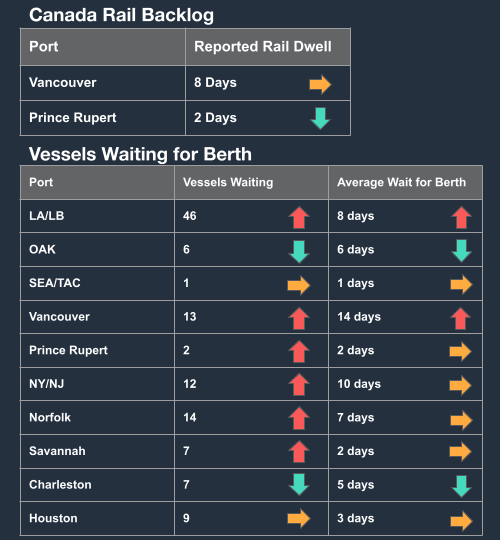 On April 22, 2022, CBP published a guide on the use of updated Customs Form (CF) 28 (Request for Information), CF29 (Notice of Action), and CF4647 (Notice to Mark and/or Notice to Redeliver) in the Automated Commercial Environment (ACE). The guide shows how to access the forms and respond to CBP within the modernized ACE portal.

Truckload Rates Expected to Plateau This Q2 According to SupplyChainDive, market forces are currently driving higher truck rates, but as Q2 progresses, truckload demand is expected to plateau and eventually decline. As spot rates dip, contract rates would likely remain elevated as the demand for produce shipping picks up this summer.

Blank Sailings Rise To Bolster Spot Rates According to The Loadstar, as export demand from China has declined and container spot rates will likely be impacted, carriers are rolling out more blank sailings. Loadstar has reported that export bookings for coming weeks have fallen by over a third as factories and warehouses remain closed and trucking remains limited.

Uphill Struggle, Downhill Stretch - Trucking’s Price Paradox The cost of trucking has hit a record yet there are concerns in the industry about the future. What’s led to the higher prices? Why might they fall? Is this a leading indicator for logistics more broadly? This report looks at a series of open source indicators for the trucking sector and finds a downturn could be nigh.

Economic Insights: Coal Facing Disruptions - EU Extends Russia Sanctions Why does coal matter for European supply chains? How significant are the new sanctions against Russian coal exports? Which industries might be affected and where else will the coal come from? This report considers the latest EU sanctions and finds that a wide range of industries may be affected, but the impact will vary among EU member states. Options for alternative sources are limited.

Weekly Economic Report: World Growth Slows In its latest projections for the global economy, the IMF downgraded economic growth and trade prospects for almost everyone. Key drivers of the gloomy outlook were the conflict in Ukraine, monetary tightening, less fiscal stimulus, a slowdown in China, and the ongoing pandemic.

Air Timeliness Indicator The Air Timeliness Indicator measures the amount of time taken to move airfreight along two major trade lanes from the point of consolidation to arrival at final destination. The latest indicator saw no change for the Transpacific Eastbound (TPEB) at 11.4 days, while the Far-East Westbound lane (FEWB) rose to its highest level since the end of February, hitting 10.4 days, potentially driven by networks fully adjusting to the changes in operations required by the conflict in Ukraine.

Ocean Timeliness Indicator The Ocean Timeliness Indicator similarly measures transit time for ocean freight along the same two trade lanes. In the past week TPEB increased for a third week to 112 days, while FEWB further fell from its peak two weeks ago, hitting 112 days. Both lanes saw decreases in delays for the first stage of their journeys. A combination of factory closures in Shenzhen and Shanghai combined with ports remaining open may be resulting in a degree of debottlenecking, but it should also be noted that there is some seasonality, with the Stage 1 index typically rising in the first few weeks of the year.