Ocean and air freight rates and trends; customs and trade industry news for the week of December 11, 2019. 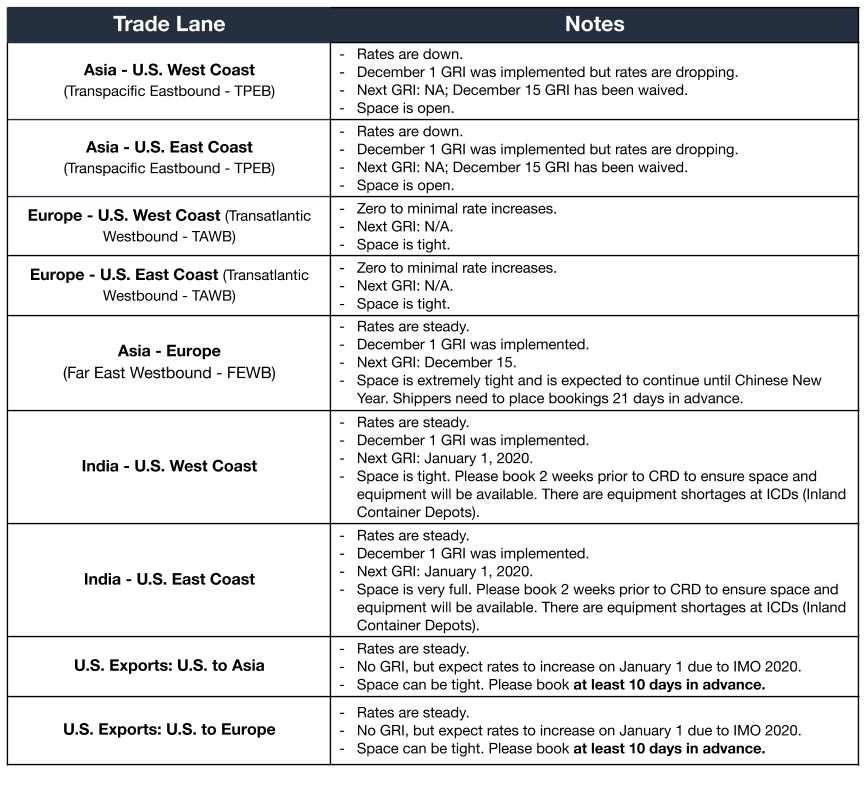 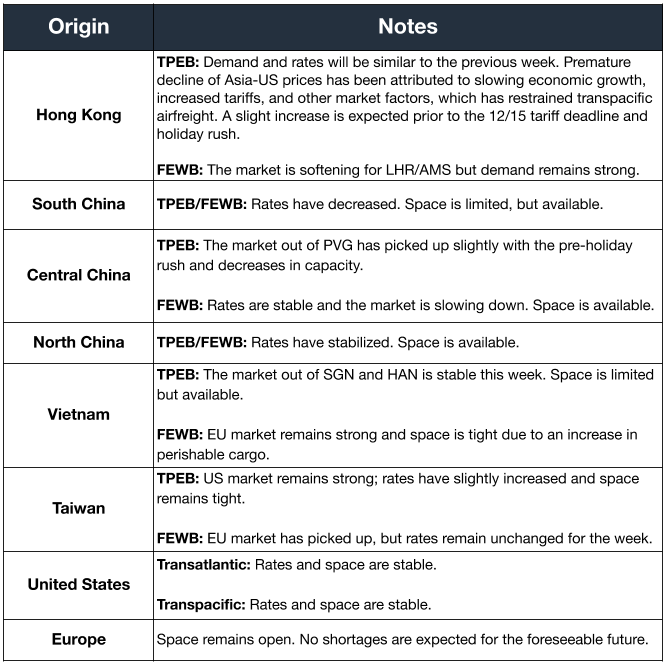 WTO Troubles Mount With no major trade negotiations progressing, the WTO has been chiefly focused on dispute settlement. Yet, on Dec. 10 its top dispute body lost two members and now falls below minimum staffing. At the same time, the Trump administration has blocked new appointments.

US October Trade Shrank according to data showing monthly exports were down by 0.2% while imports fell 1.7%. On a year-over-year census basis, US imports from China dropped 23%. Broader imports from the Pacific Rim were down almost 15% from Oct. 2018.

US Consumer Sentiment for December beat expectations and rose to its highest level since May.

USTR Seeks Comments on EU Tariff Increase The USTR recently posted a notice on the Airbus subsidies dispute with the EU. The organization is asking for comments on three matters: whether it should raise already imposed tariff rates; if some of the EU products currently being tariffed should be removed; and if more products should be added to the list. The notice contains two lists; one list is for current products and the second list is for previously proposed products that didn't make it to the final list. The comment period will be open until January 13, 2020.

USMCA Edits Approved House Speaker Nancy Pelosi announced that a deal has been reached for the new USMCA trade agreement. After long deliberation and many re-writes to the originally proposed deal in 2017, the Democrats pushed through amendments to labor, enforcement, environmental protection, and loopholes tied to pharmaceutical companies. The AFL-CIO put out a press release applauding the labor reform edits in the deal, which had been a major sticking point. USMCA agreement details will be released soon, and will then go up for a ratification vote in the House of Representatives.

Unit of Quantity Changes To align the harmonized tariff schedule of the US (HTSUS) with the new Trade Facilitation and Trade Enforcement Act (TFTEA) drawback requirements, Customs and Border Patrol (CBP) sent out a reminder that it will implement final changes to the unit of quantity (UOQ) measurements that were previously marked with an "X" in the UOQ column. After this January 1, 2020 update, the UOQ column will only have specific units of measurement (kg, no, gross, etc).