Recent news and updates related to the ocean and air freight market for the month of April 2017. 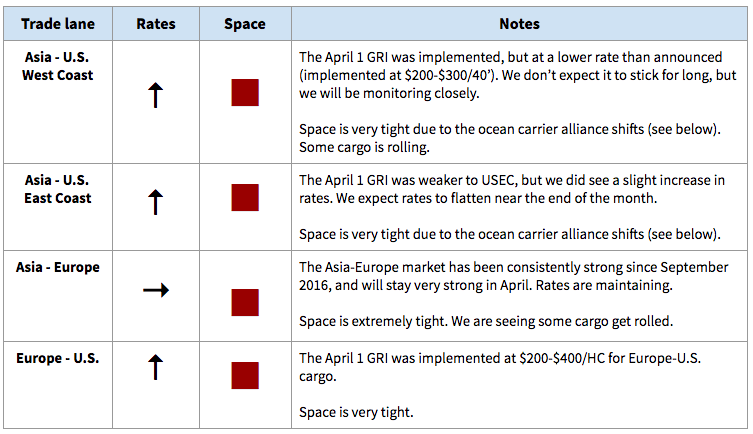 As the chart shows, no matter where you’re shipping from, space is tight. Booking 2-3 weeks ahead of time is going to be very important over the next couple of weeks.

On April 1, the new ocean carrier alliances will officially take effect. As a result of the carriers’ realignment, there will be a number of blank sailings, routing changes, and departure date changes over the next few weeks.

Your Flexport team will keep you posted on how these changes may impact you. It could be the case, for example, that a new service string will save you time and money. Let us know if you have any questions!

The Hapag-Lloyd / UASC merger was originally planned to be complete by March 31, but it has been pushed back two months. Hapag-Lloyd has announced that the new completion date will be May 31.

SM Line, which purchased Hanjin’s transpacific assets after that company’s bankruptcy, will begin operating in April. They will add a few new transpacific routes, as well as some intra-Asia services.

Air Rates Are Still High, and Space Is Still Tight

The air freight market in Asia continues to be volatile. We expect rates to remain high and capacity to be constrained for the next few weeks -- especially from China and Hong Kong. This is due to a combination of factors: