Recent news and updates related to the ocean and air freight market for the month of March 2017. 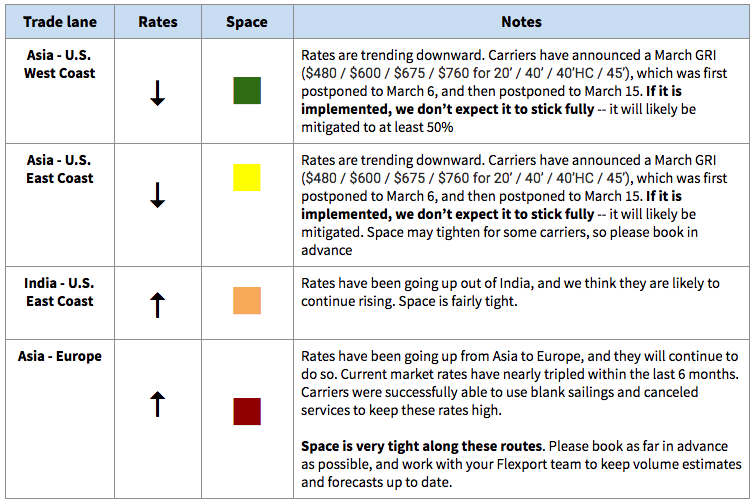 This month, the ocean carrier alliances will begin coming together (read all about their massive shift, and its implications, here). They’re just starting to announce some of their new service strings, which will be implemented in April.

Carriers will be using different terminals, new sailing dates, new services, etc. Your Flexport team will be keeping a close eye on these changes. If we spot a new routing that might work better for your supply chain, we’ll let you know.

So far, it looks like overall capacity to the U.S. East Coast (USEC) will increase, and carriers will be making additional calls to secondary USEC ports like Baltimore, Wilmington, and Jacksonville. We also expect to see bigger ships--and therefore more capacity--into the Gulf.

Generally, rates are higher than they were in February. As expected, we’re seeing a “mini peak” in air rates for the main Asian origin airports, which we expect to last through March. Prices should go back down in April.

Additionally, there have been reports of possible labor actions by ILA longshoremen on the U.S. East Coast, as they prepare for contract negotiations. No disruptions have yet been reported, but they may still occur. This is already impacting air freight rates, in anticipation of more volume being moved from ocean to air to avoid potential port slowdowns. Air rates are particularly high from Asia to the U.S. East Coast.

Another factor is that many air carriers, including China Air, have fewer freighters in service during February/March (especially in Shanghai / south of China). Since these are slower months for cargo, it’s a good time for carriers to take planes out of service for maintenance and upkeep. This reduction in supply contributes to higher prices.

Air freight pricing out of Taiwan is changing. Taiwanese carriers will be unbundling Fuel Surcharge fees from their air freight rates, which will provide more transparency into rates (especially as the price of oil rises).Final decisions are still being made, so we may see more changes in the near future. We’ll be sharing updates as we learn more.