Ocean and air freight rates and trends; trucking and customs news for the week of October 2, 2019. 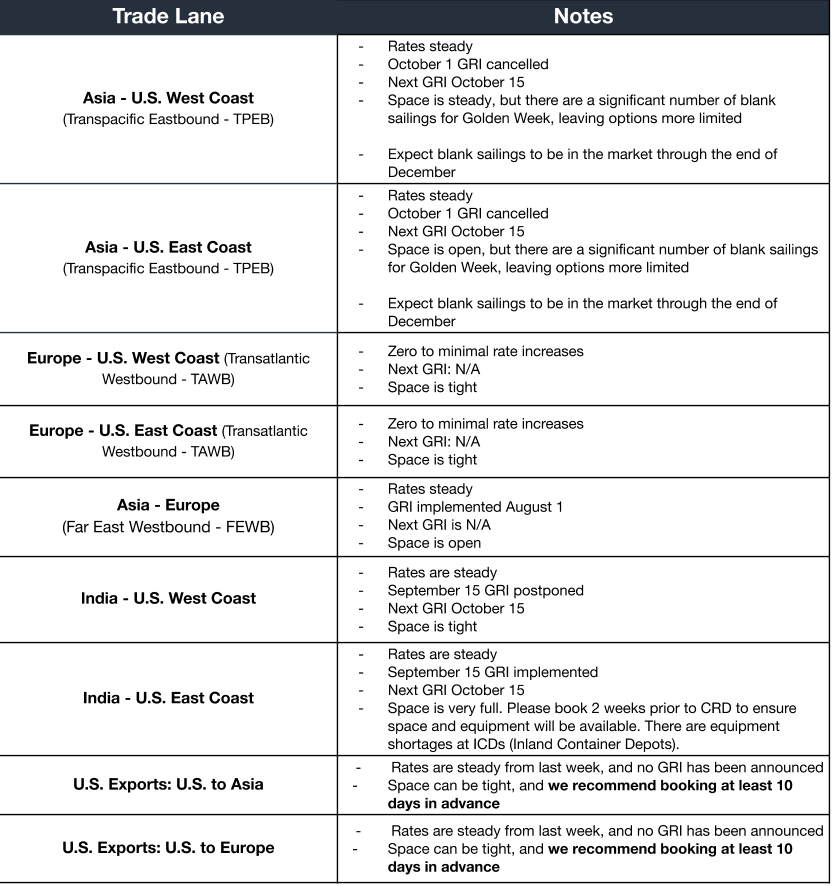 Global Economy Casting a Shadow on Trade The goods news is that trade growth is expected to continue. The bad news is that the growth rate is predicted to be slim. Economists from the World Trade Organization are lowering expectations for trade growth in 2019 and 2020. For 2019, world merchandise trade volumes are forecast to rise by 1.9%, a significant drop from the 2.6% growth forecast six months ago. For 2020, the growth rate is 2.7%, down from 3.%. While the news is not optimal, it’s not unexpected given the prevailing trade conflicts.

IMO 2020 Stirring up Uncertainty about Pricing and Timing The new regulation is set to take place January 1, however many are unclear on when new pricing will roll out as shipping and container lines transition to lower sulfur fuels. According to FreightWaves, Maritime Strategies International (MSI) sees weak spot rates on the major Asia-Europe and trans-Pacific trades for the nearterm—with possibility of additional impact from blank sailings.

New Section 301 Exemptions Granted Feels like it happens almost every other update lately, but there were two more lists of exclusions granted on list 1 and list 2 of the Section 301 tariffs. List 1 covered 92 specific product descriptions and List 2 covered 111 specific product descriptions. Just like the previously released exclusion lists they are retroactive to their implementation date and will remain in effect for one year from the publishing date on the notices.

Tariff Hike from 25% to 30% on Section 301 Tariffs Lists 1, 2, & 3 There was no official announcement of the date being moved from October 1st to October 15th on the tariff hike of 5% for Section 301 lists 1, 2, & 3. There was a USTR notice that said they would be raised to 30% on October 1st, but the proposal was never finalized through an official federal register notice. Trump did tweet it would be delayed to the 15th, but nothing further was provided after the tweet. It's believed that the planned tariff hike will be made official in the near future. Some have believed that the US and China meetings scheduled for October 10th and 11th could affect whether they move forward with the hike.

US-Japan Trade Agreement The USTR announced that the US and Japan have reached an agreement on the framework of a trade deal. There are more details that will be sorted out, but reducing tariffs on beef, pork, wheat, nuts, plants, cheese, wine, a number of vegetables and fruits, bicycle parts, musical instruments, fasteners, and specific machine tools are all included thus far. A lot of the items are the same ones that would have been in place if the US joined the Trans-Pacific Partnership. The agreement also had framework around digital trade that mirrored a lot of the language that was stated in the USMCA deal. There aren't any details on when the agreement will be implemented, but there will likely be some more items included, and it's currently unclear whether the US will lift the Section 232 steel and aluminum tariffs imposed on Japan. A second "Fact Sheet" was released by the USTR that goes into more detail on the agricultural goods that are affected by the new trade agreement.