The Conservatives’ significant victory on December 12 was unexpected for many, but has offered some clarity on Brexit. Any possibilities of Brexit being repealed are essentially gone. Boris Johnson’s large majority will enable him to push his Brexit plans through parliament without significant opposition. While this will give more freedom at home to execute Brexit, it does not necessarily improve his negotiating position with the European Union (EU).

Johnson’s campaign slogan was to ‘get Brexit done,’ and this is what he intends to do. His plan is to have the withdrawal agreement signed by January 31, 2020, followed by 11 months of negotiating a free trade agreement (FTA) with the EU. There will be no changes during the transition period, so in practice the United Kingdom (UK) will remain aligned with the EU during this time. And while there was potential for the transition period to be extended beyond December 2020, the Commons voted about a week ago to amend the Withdrawal Agreement, making any extensions to the transition period illegal.

Meanwhile, the EU—which has a strict and lengthy 33-stage process to negotiate an FTA—briefly considered asking for an extension of the transition period out of concern that 11 months would be insufficient to reach an agreement with the UK. For instance, trade agreements between the EU and Canada took seven years to negotiate; EU - Japan six years; and EU - Singapore took nine years. And, these timelines do not even include the time it takes for countries to ratify the agreements, which can take years. 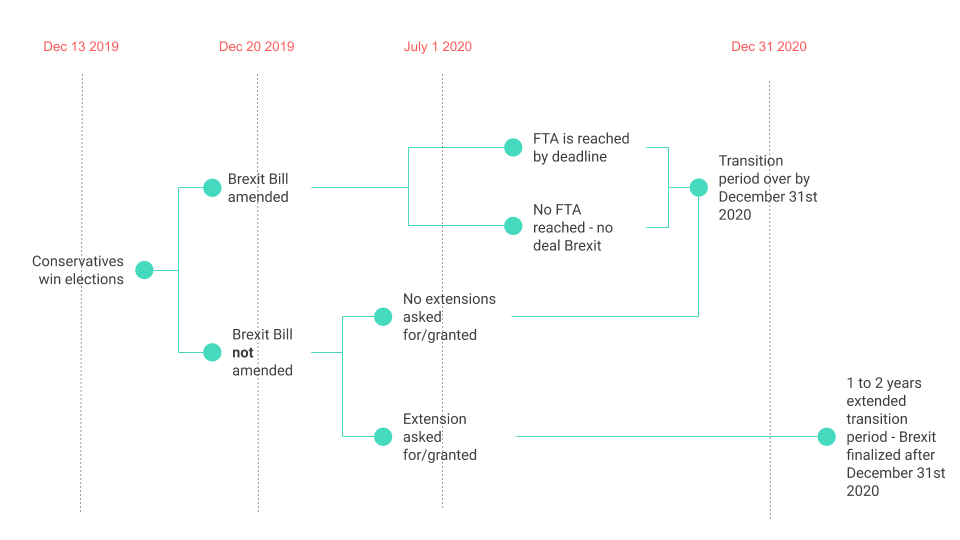 Restricting the transition period to 11 months will have serious repercussions for the negotiations, beyond setting a non-negotiable deadline. With the amendment to the Brexit bill passing in the Commons last week, both the UK and the EU will be focused on reaching agreements on what matters most to each of them. For the EU, it means trade in goods and fisheries. For the UK, it means trade in financial services. These contrasting priorities will make it challenging for negotiations to proceed smoothly and on schedule.

Under Johnson’s current Brexit deal, Northern Ireland will be leaving the EU with the rest of the UK. While Johnson has disputed there will be any border checks between Northern Ireland and Britain, officials on both sides have said checks will be necessary on certain goods.

In short, the only thing that seems certain about Brexit is that it most certainly will be happening. Prior to the passing of the Brexit Bill amendment on December 20, the when and how remained up in the air. Now it’s the question of how that remains unanswered.